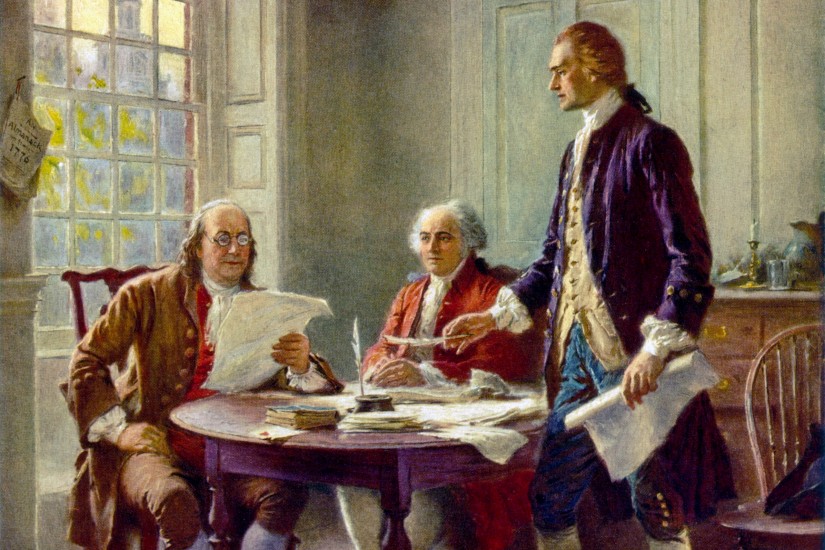 Franklin, Adams, and Jefferson working on the Declaration of Independence.
Jean Leon Gerome Ferris/Library of Congress
…

Jefferson knew that neither the French nor the Spanish king would take sides in a British civil war. To enlist allies, America had to demonstrate that it was an independent nation fighting against a common British enemy. Jefferson’s letter, clearly stating that “these United Colonies are, and of Right ought to be Free and Independent States”, was an engraved invitation to France and Spain, asking them to go to war alongside the Americans. It was approved by the Second Continental Congress on July 4, a Thursday, and printed by the next day. By Monday, Congress had placed copies aboard a fast ship bound for France, with instructions for Silas Deane, the American envoy in Paris, to “immediately communicate the piece to the Court of France, and send copies of it to the [Court of Spain]”. And though the document became known as the Declaration of Independence, it also declared the colonists’ dependence on both Spain and France.

The Declaration was not meant for George III?the British monarch had already gotten the message. In October 1775, he told Parliament that the rebellion “is manifestly carried on for the purpose of establishing an independent empire.” Nor was the Declaration primarily intended to rally the American colonists to the cause of independence—they had already instructed their delegates to vote for separation.

The very idea of a document to formally declare independence was unprecedented; no previous nation which had rebelled against its mother country, as the Dutch Republic did against Spain over a century earlier, needed to announce its intentions in written form.

France and Spain had long been spoiling for a rematch with Great Britain, and America knew it. During the Seven Years’ War against Britain, which ended in 1763, with France lost Canada and its central political position in Europe and Spain gave up both Florida and its dominance over the Gulf of Mexico. American independence was a means of weakening British domination in Europe and overseas.

Both countries had already secretly provided arms and clothing to the rebellious American colonies. Even before Lexington and Concord, government-backed merchants from both nations traded European blankets, gunpowder and muskets for American tobacco, whale oil and cod. But blankets and muskets alone would never be enough against the British onslaught; in order to survive, America needed the full military might of France and Spain at its side.