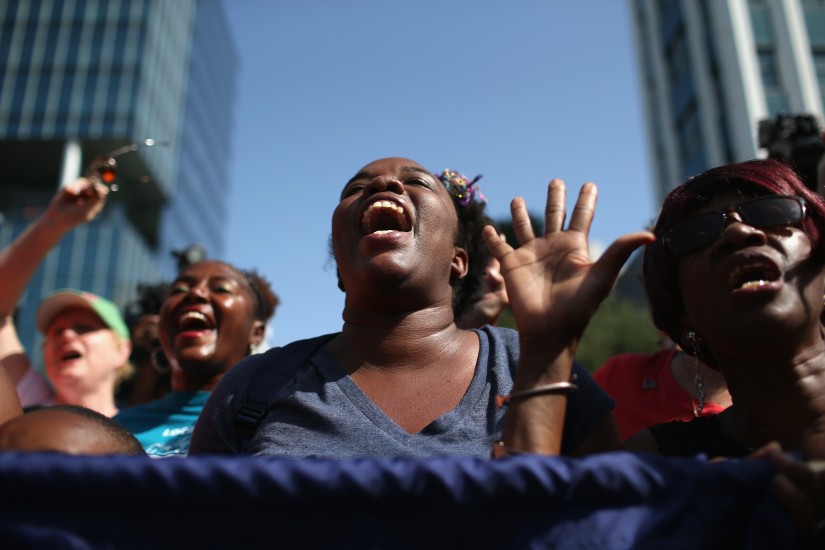 A crowd cheers after the Confederate flag was lowered from the South Carolina Statehouse grounds for the last time on July 10, 2015.
John Moore/Getty Images
…

Lottie Joiner
Why did you feel the flag needed to be taken down?

Bree Newsome
On one hand there is a kind of general history that's represented by the Confederate flag and then it resonated for me in a personal way. My ancestors were enslaved in South Carolina. I know their names. This is not something that's abstract for me in any kind of way. I grew up with my grandmother who was raised in Greenville, who told me about her experiences seeing the Ku Klux Klan beat her neighbor and things like that. The massacre in Charleston brought a refocus on the flag.

Lottie Joiner
Why did you choose that day? Did President Obama’s call for the removal of the flag encourage you to do it or had you decided before then that you would take it down?

Bree Newsome
We [Charlotte activists] actually decided before. The Tuesday before [I scaled the pole] we had a meeting. There were about 10 to 12 of us activists who were on the ground that day involved in the action who, prior to the massacre happening in Charleston, had had previous conversations about how we would like to take the flag down in South Carolina, but it wasn't a concrete plan. It was just something as people who had grown up in the Carolinas this was just something that has always been an issue.