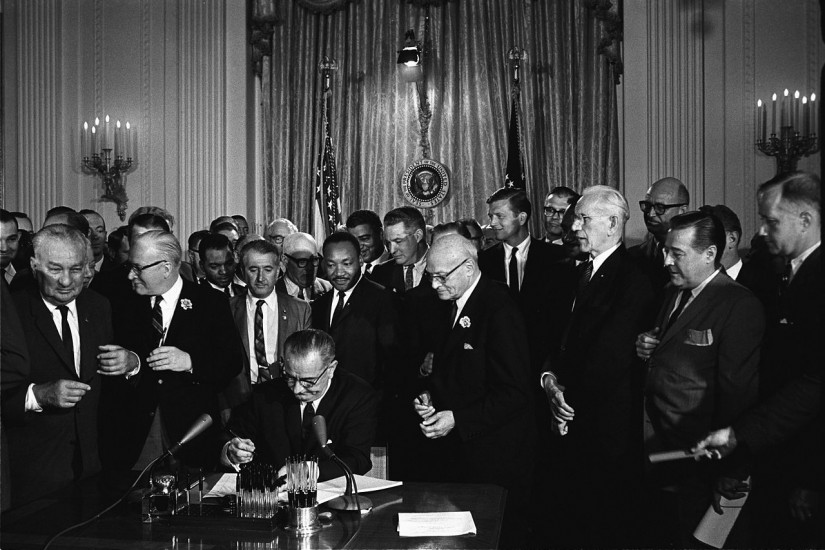 Fifty-three years ago, President Lyndon B. Johnson signed the Civil Rights Act of 1964 and forcefully challenged “all” Americans to “close the springs of racial poison.”
The landmark legislation spurred all sorts of racial progress — from desegregating Southern establishments, to driving anti-discrimination lawsuits, to opening the doors of opportunity for the new black middle class.

But this celebratory history that Americans love has only been part of the story. The other, less popular part of the story is understandably underplayed: The Civil Rights Act of 1964, intended to dismantle racism, also spurred racist progress.

Racial disparities persisted after the law was passed because discriminatory policies persisted under a patina of colorblindness. The legacy of the Civil Rights Act’s failures abound: America is still hemorrhaging from the racism of police bullets, health disparities and environmental catastrophes. The black unemployment rate has been twice the white unemployment rate for 60 years, segregation is on the rise in public schools across America, and an unprecedented number of black and brown bodies have been mass incarcerated as a result of the war on drugs.

Discrimination persisted because legislators failed to close the oldest spring of racial poison: the accumulated gains of past discrimination. For instance, organized white labor and Congress balked at eliminating the accrued seniority of white workers. “We don’t think that one form of injustice can be corrected or should be corrected by creating another,” AFL-CIO lawyer Thomas E. Harris testified before a congressional committee in 1964.

Not addressing past discrimination was “akin to asking the Negro to enter the 100-yard dash forty yards before the starting line,” retorted Carl Rachlin, the general counsel for the Congress of Racial Equality (CORE). But that was largely what the writers of the 1964 act ended up asking the Negro to do, because the act focused on dismantling Jim Crow, not guaranteeing equal opportunity.