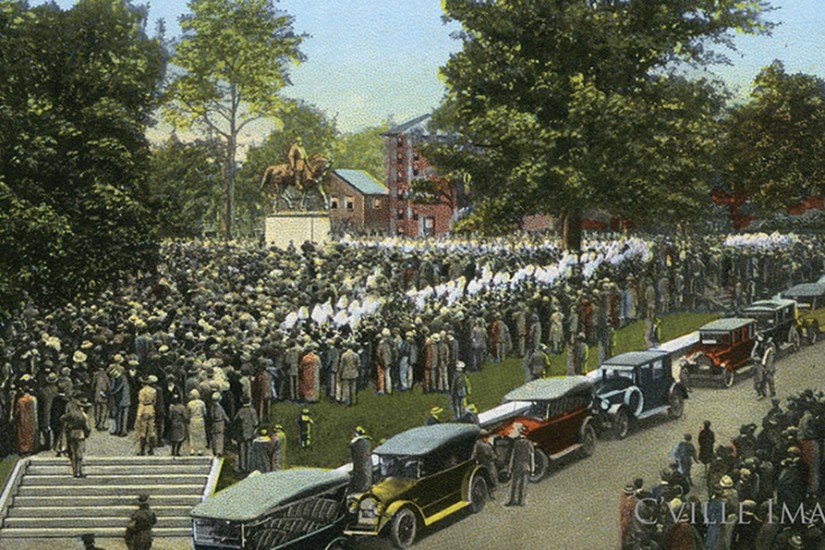 In 1924, the United Confederate Veterans and Sons of Confederate Veterans held their annual reunions in Charlottesville to coincide with the unveiling of a new equestrian statue of Robert E. Lee. The work of two artists—Henry Shrady, a self-taught sculptor who had received the initial commission in 1917 but died in 1922, and Leo Lentelli, an Italian immigrant who improved upon and eventually fulfilled Shrady's vision—the bronze figure stood an imposing twenty-six feet high, twelve feet long, and eight feet wide at the base. It was a stirring emblem of Confederate triumph and defeat, or, from the white community's perspective, triumph in defeat.

Due to a delay on the railroad, the general had been a week or more late in arriving. But on the evening of May 20, much to the organizers' relief, he sat safely astride his trusted horse Traveller and hidden from view under a large Confederate flag.

A few blocks away, at the Jefferson Theatre, dignitaries gathered for "the formal welcome and presentation of official ladies," and speeches commenced at eight o'clock. Everyone heaped praise on Lee, "that peerless Christian gentleman, that stainless leader of a stainless cause," as well as on the philanthropist Paul Goodloe McIntire. The Charlottesville-born businessman had paid for the statue and then donated the park in which it stood. It was the last of three statues and the first of four parks that McIntire gave to Charlottesville.

"Words cannot express the appreciation this community feels to Mr. Paul Goodloe McIntire for his generosity in this and other lines," a city council member told the audience, no doubt recalling that three years earlier McIntire had also presented the city an even more impressive statue of Stonewall Jackson. "These monuments will ever remain to remind us of the heroic deeds and great service rendered our country by these sons of Virginia, in whose memories they are erected."