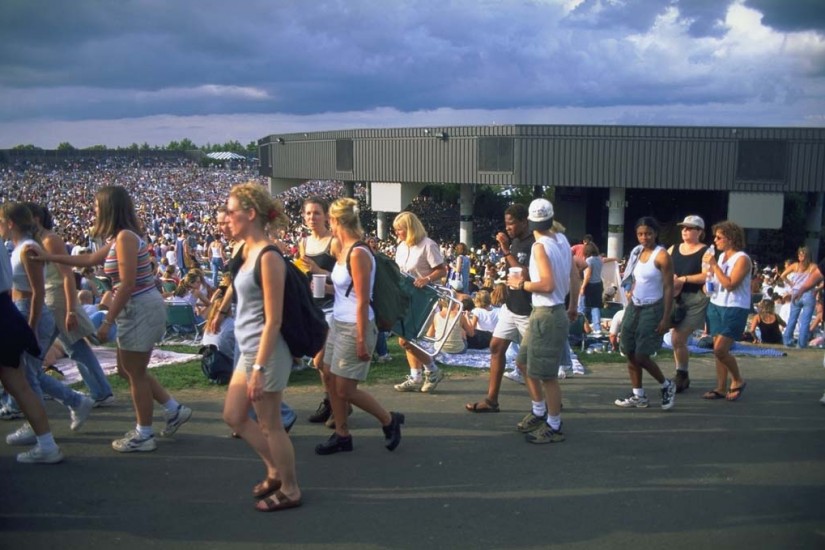 Imagine many of the country’s most influential women all gathered together to stand up for gender equality on a national stage. There are stars performing before a massive crowd, Planned Parenthood booths­ (along with protesters), and reporters from news outlets analyzing what this event says about the state of women’s rights. Sounds like a scene from the Women’s March on Washington—but it actually occurred 20 years ago this summer with the debut of Lilith Fair, a music festival designed to give women the same lucrative touring gigs as men. Cofounded by singer-songwriter Sarah McLachlan, this multicity tour broke new ground, from the all-female talent lineup that promoters said would never work, to the controversies it ignited in the media about race and feminism. Here McLachlan and some of her fellow Lilith performers talk candidly about a cultural movement lauded by fans for its feminist ideals and lambasted by critics for its lack of diversity. And a new generation of performers reflect on the legacy of Lilith Fair and why their own fight for equality in the music industry continues.

The 1990s were a strange time for women musicians. On the one hand, the singer-songwriter movement was ushering in young female stars like Tori Amos, Tracy Chapman, and McLachlan. But women still had to fight harder than the guys for radio airtime and touring slots. In 1996, McLachlan was 28, still climbing the charts with singles from her breakthrough album, Fumbling Toward Ecstasy, and struggling to write the follow-up, Surfacing, which would become her best-selling record. Searching for inspiration, she organized a mini festival—a gathering that would ultimately morph into Lilith Fair.

SARAH McLACHLAN (singer, cofounder of Lilith Fair): We looked around [at other tours] and thought, Wow, they’re just full of men. And yet there’s all this amazing music being made by women right now. So why is that not being represented?