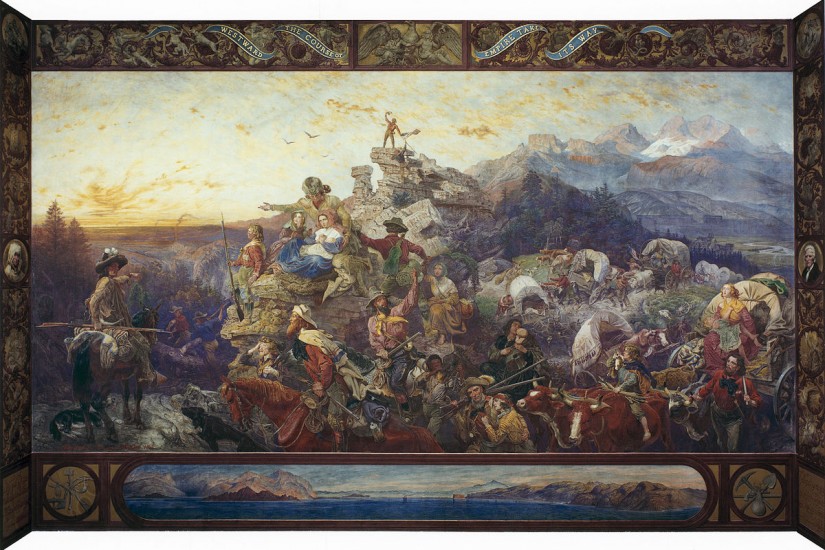 "Westward the Course of Empire Takes Its Way," by Emanuel Leutze (1860).
Wikimedia Commons

Two hundred and twenty-two years ago today, in a field near what’s now Greenville, Ohio, a preacher named John Rhys delivered an Independence Day address to the United States Army.

The troops in his audience had recently won a decisive victory over the Western Confederacy, an alliance of Native peoples who’d been battling white encroachment in the Midwest for a decade. That victory had brought to an end the first Indian war of the federal era. More than a thousand white Americans had been killed, and perhaps twice that number of Native Americans.

Native leaders expected that defeat would mean a permanent expulsion from their lands. But Reverend Rhys took a different line. “The love of conquest and enlargement of territory should be sacrificed,” he told the troops. Whites and Indians should move to each other’s towns, get to know each other better, perhaps even fall in love. When they recognized their mutual humanity, he insisted, they would become “one people, and have but one interest at heart.”

It’s easy to see the relationship between white people and Native Americans in early US history as a zero-sum game: the United States gave national form to a practice of settler colonialism that had marginalized Native people for centuries; the interests of white settlers who pushed forward into Indian country after 1776 were fundamentally opposed to those of Native Americans.

And in their broad outline, these assumptions are correct. From George Washington to Andrew Jackson (and beyond), America’s presidents had little regard for the wellbeing of Native people. But Rhys’s Independence Day oration points to a very different outcome, free of mass murder and terror.

John Morgan Rhys wasn’t the lone voice calling for integration. In fact, the idea that Native Americans and white people should live together in a single nation was the formal policy of the US government from the 1790s through the 1820s. The dispossession and removal of Native Americans in the first fifty or sixty years of the United States wasn’t driven solely by racism. It happened despite the insistence of many powerful voices — from presidents to bureaucrats to authors to clergymen — that coexistence and perhaps even integration were possible.

What happened, then, to this parallel vision? Why weren’t the principles of Rhys’s oration put into practice?