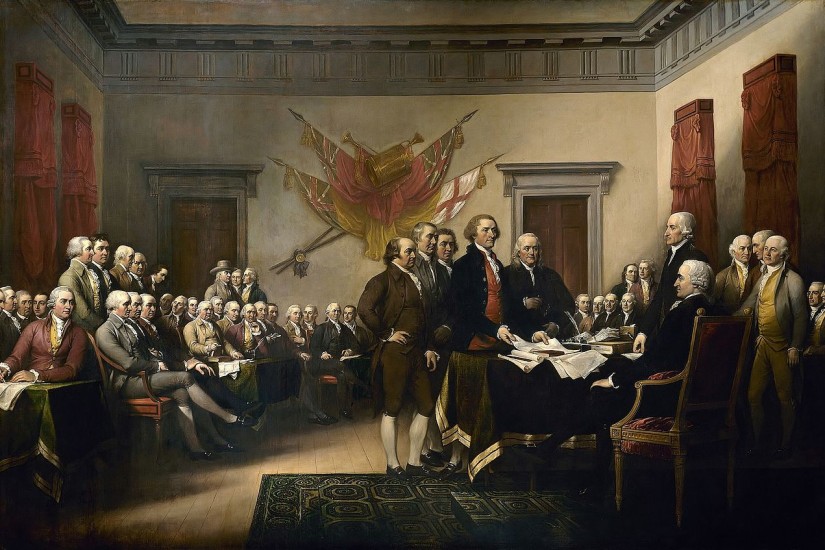 The American War of Independence was fought from April 19, 1775 (Lexington and Concord) to September 3, 1783 (the Peace of Paris), and although Massachusetts and some other states observe the first of those dates as Patriots’ Day, neither has become a national holiday. It’s July 4, of course, that reigns as our undisputed Independence Day—the occasion for picnics and parades, festivities and fireworks, and star-spangled, red-white-and-blue kitsch. That was when the representatives at the Second Continental Congress, the 13 colonies’ newly formed governing body, signed the Declaration of Independence, our nation’s founding document, which is still often read aloud, 241 years later, at July 4 celebrations across the land.

Since 1776, the Declaration of Independence has assumed a near-biblical status in America’s national mythology—its opening paragraphs memorized by schoolchildren, its formulation of liberal principles of equality and self-government venerated by citizens of all political stripes. It still provides a trump card for its chief author, Thomas Jefferson, who in recent years has been increasingly scorned for the libertarian elements of his thought and for his slaveholding.

But in truth the Declaration wasn’t quite the singular achievement we remember it to be. As it turns out, nearly 100 other “declarations of independence” had already been issued in the months leading up to July 4th, 1776, by states, towns, counties, and assorted other bodies. The Declaration of Independence endorsed at the Continental Congress that July wasn’t a bolt out of the blue: It was more like a final draft in a loose, many-centered, wide-ranging process, authored not by one man but by a chorus of voices in a fledgling nation whose people had caught independence fever and were suddenly proclaiming it with contagious enthusiasm.

In the spring of 1776, talk of independence was everywhere. In that heady but fearful time, with the Continental Army already at war against British troops, military battalions in Pennsylvania endorsed independence. So did mechanics in New York and grand jurors in South Carolina. Declarations of separation from the Crown were issued, too, by the people of Topsfield, Massachusetts; of King’s District, New York (part of Albany County); of Anne Arundel Country, Maryland—and by almost every colonial assembly. Today, when it often feels as if Americans are spiraling apart, becoming less connected to our political leaders and less bound to one another, it’s worth remembering what made independence possible wasn’t just a spirit of rebellion; it was the way that spirit was harnessed to a newfound commitment to self-government across the diverse colonies.