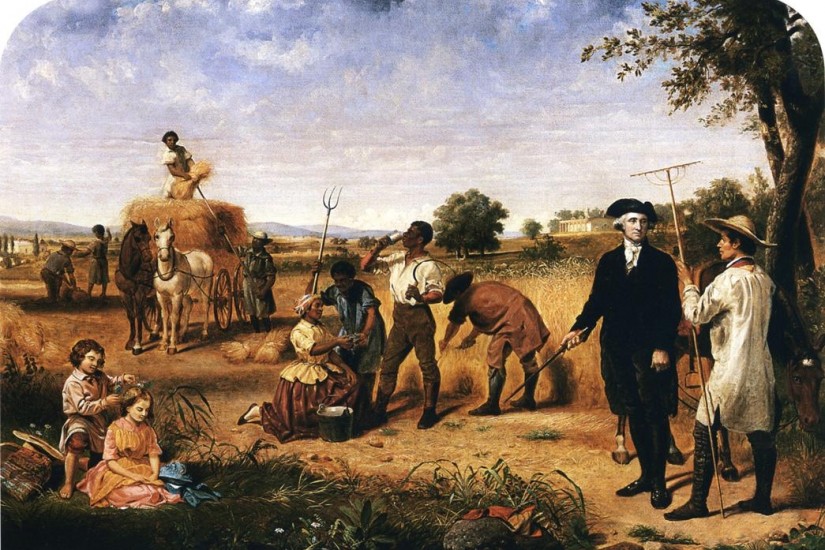 "Washington as Farmer at Mount Vernon", 1851, part of a series on George Washington by Junius Brutus Stearns.
Wikimedia Commons
…

Fighting over the Founders is divided into cross-sections, each approaching different parts of our national culture, groups which alternately revere, recreate, and research the Revolution’s legacy. There are two rival camps with respect to the Spirit of ’76: “essentialists,” for whom, Schocket says, the founders were “demigods,” whose revolution possessed “one, true, knowable, unchanging meaning for us now and forever,” and “organicists,” who believe that the United States is “ever in the process of trying to complete a Revolution that the founders left unfinished.” The essentialist/organicist divide forms a heuristic for the chapters that follow, a process that maps out where the different remembrances, in the forms of memorials, historic sites, movies, books, and television, sit on the spectrum between unquestioning veneration and strident denunciation.

For an essentialist, the essence of America is a creed—the holiness of private property, a strain of Christian thought, fear of centralized power—that has sustained it for 240 years. But those who claim in all sincerity that the US was founded as a Christian nation have little evidentiary support: “The only religious reference in the Declaration of Independence is in the preamble, with a nod to the ‘inalienable rights endowed’ by a ‘Creator,’” Schocket reminds them, referring to Article VII of the Constitution, which unambiguously prohibits the establishment of a national religion, and forbids religious tests for federal office.

For an organicist, by contrast, “the past is darker, more ambiguous, more open to interpretation, and something to improve upon.” Schocket places himself squarely in this camp. The history of the United States of America is one of “progress from a benighted world of slavery and patriarchy,” he writes, where “the founders left work for future generations.” Organicist historians value attempts to understand flawed leaders over the worship of heroes.