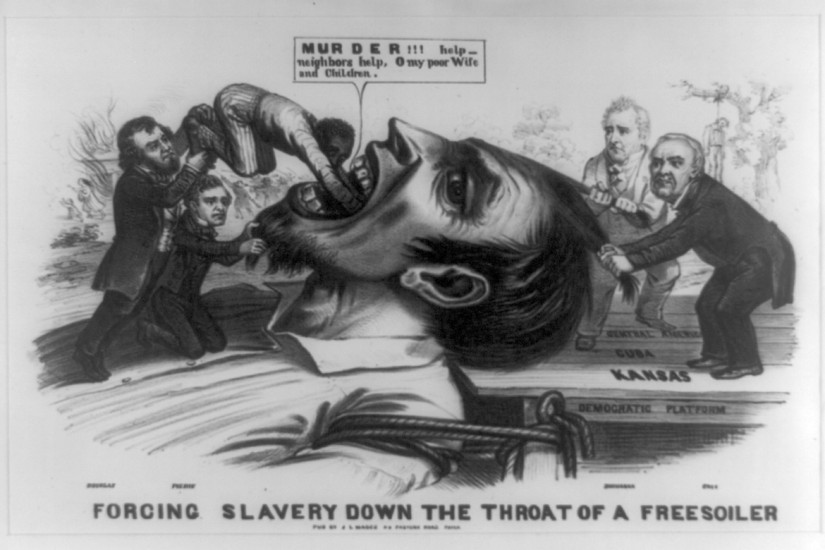 "Forcing slavery down the throat of a freesoiler," J.L. Magee, 1856.
Library of Congress
…

In the antebellum era, the Democratic Party was the tool of the Slave Power, created and ruled by enslaver oligarchs who used the power of the federal government to spread slavery across the western hemisphere. By mid-1857, they had succeeded in permitting the spread of slavery in many of the new western lands forcibly taken from Mexico, but were frustrated by the civil war raging in the Kansas Territory. Created in 1854 by the infamous Kansas-Nebraska Act, the Kansas Territory erupted in violence when armed pro-slavery Southerners, primarily from Missouri, began attacking anti-slavery settlers. The majority of the territorial population opposed slavery, but pro-slavery terrorists, supported by the Democratic administration of President Franklin Pierce, seized control of the territorial government and manipulated elections and laws to their advantage. Anti-slavery residents refused to accept both the spread of slavery and the unelected rule of Missourians.

The fraudulent pro-slavery government of Kansas produced a pro-slavery constitution in preparation for statehood. The constitution, named after the town of Lecompton, where it was drafted, did not have the support of the territorial population, did not represent their values, and, like the AHCA, was not presented to the public. Nevertheless, it was sent to Congress for approval. Determined to bring Kansas into the Union as another slave state (and thus increase their power in Congress and the Electoral College), white Southerners rushed to push the bill through. In addition, Democratic President James Buchanan, who had publicly pledged to put the constitution to a vote, reneged and disavowed his own territorial governor. When Northerners discovered that the constitution had been crafted in secret and would not be put to a popular referendum in Kansas, opposition to the bill exploded. Calling it a “swindle” and “grand fraud,” the anti-slavery Republican Party led the charge against it.