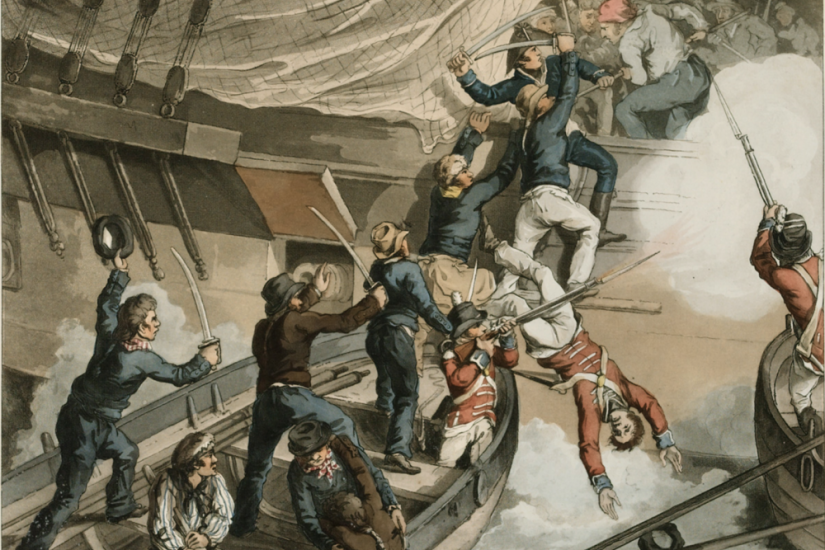 The United States has a special history, and thus bears a unique stake, when it comes to the flight of foreign refugees, particularly those seeking sanctuary from oppression and violence. Political asylum has long been a defining element of America’s national identity, beginning most forcefully in 1776 with Thomas Paine’s pledge in Common Sense that independence from Great Britain would afford “an asylum for mankind.”

Curiously, the nation’s decision to admit asylum-seekers was not a direct consequence of our Revolutionary idealism. Instead, the extension of political asylum owes much to a naval uprising—on a British ship—in 1797.

On the night of September 22, the bloodiest mutiny ever suffered by the Royal Navy erupted aboard the frigate HMS Hermione off the western coast of Puerto Rico. Stabbed repeatedly with cutlasses and bayonets, ten officers, including the ship’s sadistic captain, Hugh Pigot, were thrown overboard.

The mutiny thrust upon the administration of President John Adams a set of incendiary issues involving natural rights, American citizenship, and political asylum—a consequence of the purported presence of impressed (i.e. conscripted) American sailors aboard the Hermione and, in turn, the prospect of their extradition to Great Britain after seeking refuge in the United States.

The decade of the 1790s wasn’t necessarily friendly to asylum seekers. Although President George Washington favored a liberal immigration policy, limited to be sure to “white Europeans,” the French Revolution coupled with unrest in Ireland against British occupation contributed to a lapping tide of xenophobia in the early Republic, especially among leading members of the Federalist Party, who viewed England as a lone bastion of civil order in Europe.

Nativist fears crested with congressional passage in 1798 of the Alien Acts, which granted President Adams, as Washington’s successor, the power to deport émigrés without due process of law. Another Alien Act, in a thinly veiled attempt to deter immigration, extended the minimum period of residence from five to 14 years for prospective citizens. A Federalist representative from Massachusetts railed that he did “not wish to invite hoards [sic] of wild Irishmen.”