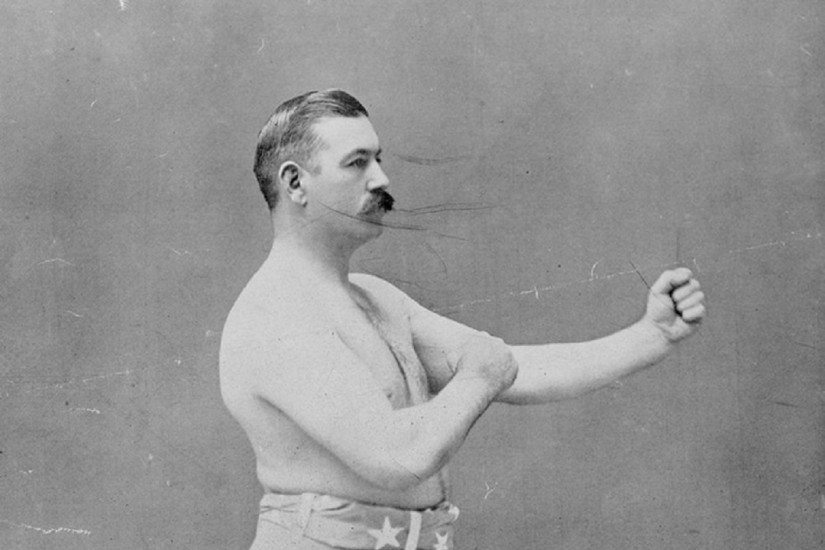 Illustration of John L. Sullivan from a Supplement to Police Gazette, vol. LXXII, no. 1078, Saturday April 23d, 1898.
Library of Congress
…

In fact, perhaps no American has so embodied his times like John L. The United States was the fastest-growing country in the world. Its population would soon eclipse that of Great Britain, and it was on its way to becoming the world’s leading industrial superpower. The country pulsated with the infusion of new immigrants, new industry, and new inventions—telephones, electric lights—that were transforming daily life.

Both Sullivan, son of Irish immigrants, and the upstart United States in the 1880s were young and virile, proud and cocky, crude and pugnacious. A boxer always represents power in its most visceral sense, and John L. symbolized an ascendant America that was flexing its economic muscles on the world stage. The champion exuded a rough masculinity that appealed to the growing numbers who feared that life in an increasingly urbanized United States was becoming less rugged, more sedentary. And at a time when the increasingly popular theory of social Darwinism emphasized the survival of the fittest, there was no place in America where that could be so clearly demonstrated than inside a boxing ring.

The legendary spirit of the fighting Irish that was made flesh in Sullivan transformed him into a hero for the sons and daughters of the Emerald Isle who had felt emasculated in the wake of the Great Hunger. To Irish Americans who had believed themselves powerless for centuries under the thumb of the British, slighted in their new homeland, and traumatized by the horrific famine of the 1840s, here came one of their own who exuded strength, who didn’t lack confidence, and who didn’t suffer from a lack of pride. His self-belief was an elixir for a people who had suffered from malignant shame.