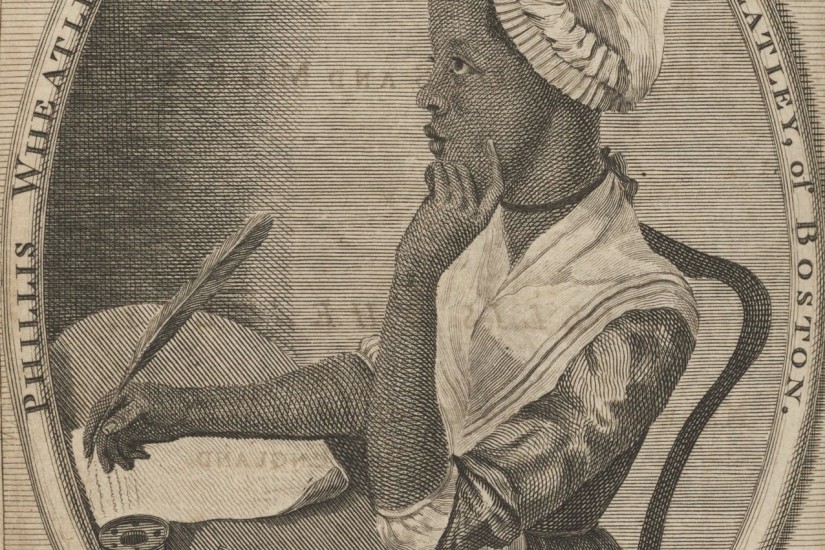 The image of Phillis Wheatley that appeared in her book of poetry (1773).
Houghton Library/Harvard University/Wikimedia Commons
…

The African-American poet Phillis Wheatley has achieved iconic status in American culture. A 174-word letter from her to a fellow servant of African descent in 1776 sold at auction in 2005 for $253,000, well over double what it had been expected to fetch, and the highest price ever paid for a letter by a woman of African descent. Elementary, middle, and high schools throughout the United States bear her name. A prominent statue in Boston memorializes her. Wheatley is the subject of numerous recent stories written for children and adolescents. Googling “Phillis Wheatley” turns up about 665,000 items.

The author we now know as Phillis Wheatley was born around 1753 somewhere in West Africa, probably between present-day Gambia and Ghana. She was forced to endure the Middle Passage from Africa to America when she was about seven or eight years old, and brought to Boston, where she was sold as a domestic servant to John and Susanna Wheatley. They called her Phillis, after the name of the slave ship that brought her from Africa. Encouraged by her owners, Phillis Wheatley quickly became literate and began writing poetry that soon found its way into local newspapers. Notwithstanding the prejudices against her race, social status, gender, and age, Wheatley became the first published woman of African descent in 1767. She gained international recognition with her funeral elegy on the death of the evangelist George Whitefield, addressed to his English patron, the Countess of Huntingdon, and published in Boston and London in 1770. By 1772 Wheatley had written enough poems to enable her to try to capitalize on her growing transatlantic reputation by producing a book of previously published and new works. Unable to find a publisher in Boston, in part because of racial prejudice, Wheatley and her owners successfully sought a London publisher and Huntingdon’s patronage in 1773 for her Poems on Various Subjects, Religious and Moral.

Phillis Wheatley’s trip to London with her master’s son to arrange for the publication of her book was a turning point in her personal and professional lives. Her six-week stay in London enabled her to establish a network of associations that included many of the militarily, politically, religiously, and socially most important people in North America and Britain She arrived in England a year after a court decision declared that slave owners could not legally compel their slaves to return to the colonies.