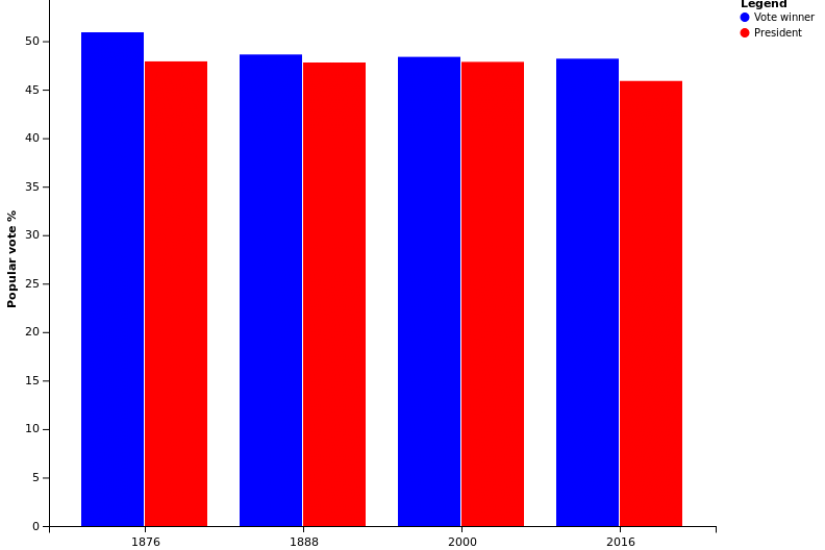 Comparison of the four U.S. presidential elections in which the Electoral College winner lost the popular vote.
Schmarrnintelligenz/Wikimedia

President Trump seems to live atop his own petard. Every time it seems like he should have an advantage, he squanders it by torpedoing a legislative package, firing a government official, making absurd utterances to foreign leaders or ranting on Twitter, often against the better judgment of many who work for him. No wonder that, since Inauguration Day, his approval rating has never risen higher than the 46 percent of the vote he won last November; a Washington Post-ABC News poll out last weekend showed it at 36 percent.

But these unforced errors don’t quite explain his inability to take advantage of a boost in economic confidence or to expand, even slightly, the passionate base that carried him to victory. The problem lies with that very victory — the one that won him not only the presidency but also 3 million fewer votes than Hillary Clinton. The legacy of such deficits suggests there’s little he can do to gain the trust of the majority. American history is clear: Presidents who’ve lost the popular vote don’t win popular support.

The four previous presidents who finished second in votes cast all struggled to convince Americans that they were doing a good job. Each battled the perception that his victory was undemocratic and illegitimate; each soon lost the confidence of his own partisans in Congress and led an administration that historians regard as a failure. Each faced an uphill struggle to keep his base happy and mobilized while also reaching out to the majority, which preferred policies his voters detested. Most, like Trump so far, did not even try to square that circle.