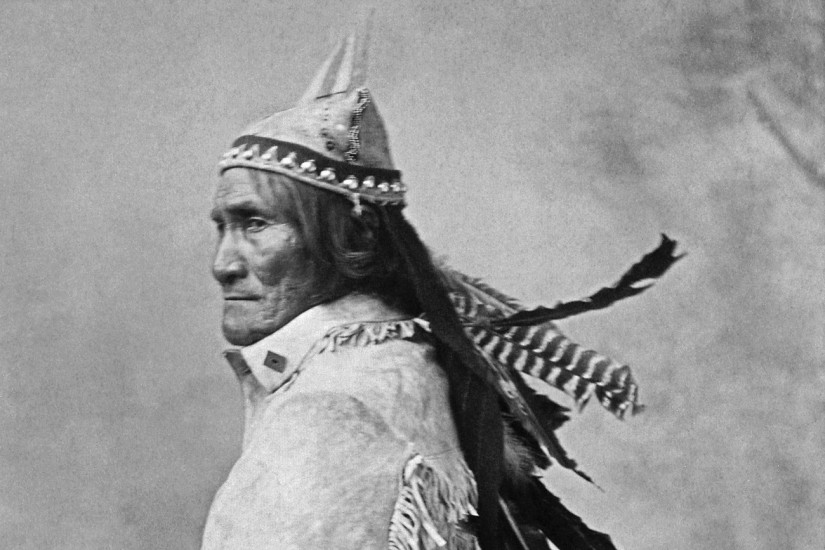 ... autobiography that his greatest joy upon arriving at adulthood was that he could marry her. Goyahkla took Alope to live near his mother. His bride decorated their tipi with beads and pictures drawn on buckskin. She was a good wife, he notes, and they were happy together with their three children.

... autobiography that his greatest joy upon arriving at adulthood was that he could marry her. Goyahkla took Alope to live near his mother. His bride decorated their tipi with beads and pictures drawn on buckskin. She was a good wife, he notes, and they were happy together with their three children.

When Goyahkla crossed into Mexico again around 1850 (Geronimo in his autobiography cites 1858 but is often off in his dating), he had no reason to suspect anything out of the usual. Traveling in a large group under Mangas Coloradas, the Apaches — including members of the Bedonkohe band to which Goyahkla belonged and the Nednai band, both subdivisions of the Chiricahua Apaches — passed through Sonora on their way to Casas Grandes. They camped at what is generally believed to be Janos (but referred to as Kaskiyeh in the autobiography), and many of the men went into town to trade. This went on for several days, each time a guard of men staying behind to protect the women, children, and supplies.

One afternoon, however, as the men were returning to camp, they met some women and children fleeing from Mexican troops who had attacked the camp, killing the guards as well as many of the women and children, destroying supplies, and stealing the Apaches’ ponies. When Goyahkla reached the camp, he discovered his wife, mother, and three children all dead. He tells in his autobiography of going off by himself and standing by a river. Geronimo, so many years after the event, does not say what he was feeling at that river, but his understated description clearly speaks powerfully to a great grief and sense of loss.

Without supplies and with most of their weapons and ponies lost, the survivors turned back toward Arizona. The elderly Geronimo recalls how he was unable to pray or devise any plan of action at the moment — devoid of purpose, he followed his comrades silently, staying by himself just within hearing of the now much smaller group.

Arriving at his home, Goyahkla gazed, certainly with great sorrow, at Alope’s decorations and their children’s toy before burning them, along with his tipi and his mother’s. Never again, Geronimo notes in his autobiography, would he feel content in his own home. Then, turning from his immediate grief, he vowed revenge on the Mexicans. A year later, Goyahkla returned to Mexico within a large war party and began to exact that revenge. It reportedly was during this excursion into Mexico that his enemies began calling him Geronimo, although no definitive explanation for the naming has ever been given. The name stuck, and Geronimo would continue his battles against Mexicans and, before long, settlers and soldiers of the United States who invaded his homeland, earning the warrior’s reputation that would stay with him throughout his life and into the twenty-first century, even into places that Geronimo could never have imagined, such as Pakistan.

At first glance, Geronimo seems an unlikely candidate to compose his life story and be willing to share it with those whom he had been fighting for most of his adult life. There is a great desire, however, in many people, perhaps in most, to want to set the record straight and be understood and ...