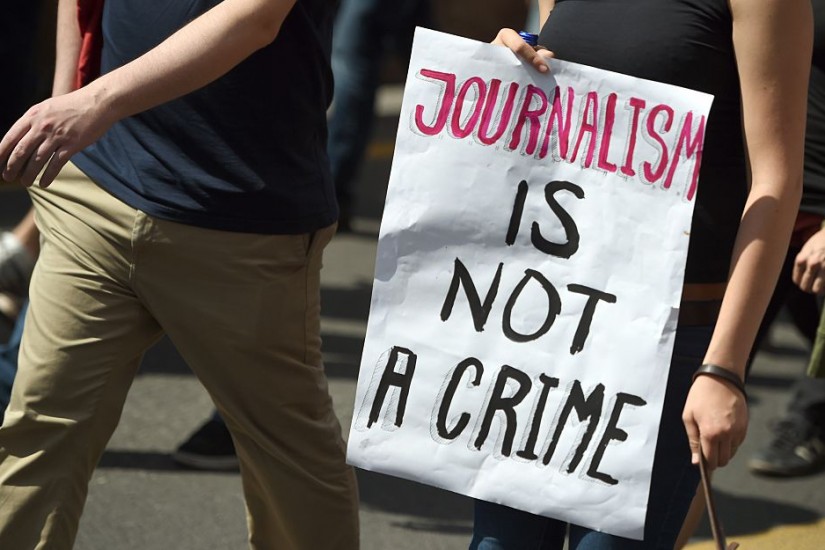 Protester holds a poster written 'Journalism in not a crime' during a demonstration in support of freedom of press on August 1, 2015
Britta Peterson/Getty Images

The constant churn among President Trump’s communications staff — including the abrupt ouster of Anthony Scaramucci, who days ago promised to bring “an era of a new good feeling” to press relations in his role as communications director — has not obscured the underlying principle driving their media efforts: unremitting hostility toward a free and objective press.

Even newly appointed Chief of Staff John F. Kelly appears to scorn the news media. In May, when a ceremonial saber was given to Trump at the U.S. Coast Guard Academy graduation ceremony, Kelly suggested that Trump might “use it on the press.” The president seemed to like the idea, as well he might. Last month, he retweeted a GIF depicting his appearance on “WrestleMania” with a CNN logo superimposed on the face of the man he pummeled.

While both Trump and Kelly passed off their comments as jokes, the increasingly commonplace threats of violence directed at the press ought to be taken quite seriously.

Accused of being purveyors of “fake news,” journalists who write stories critical of the Trump administration regularly receive warnings on social media that they or members of their family will be killed. The Twitter feeds of Jewish reporters are bombarded with images of gas chambers and ovens. Female reporters get emails telling them they will be raped. Black reporters are assailed by racial epithets and threats of lynching.

In some measure, the public’s antagonism toward the press is not new, and presidents going back to John Adams have expressed frustration with and pursued action against media coverage they believe biased or unfair. But sustained rage directed at reporters has not reached the current level of ferocity since the 1820s and 1830s, when members of the anti-slavery press faced violence and suppression as a matter of course.

Then, as now, reactionary forces aimed their vitriol and hostility at the wrong targets.