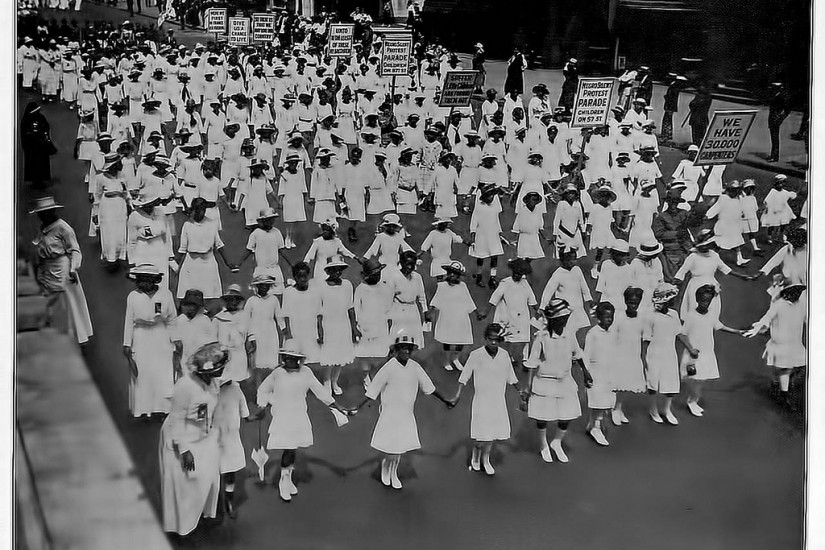 The "Silent Parade" in New York 1917; organized by the NAACP to protest the East St. Louis Riot violence against African-Americans.
Wikimedia Commons

That march on July 28, 1917, was a massive silent protest against racial violence. Outraged by several recently-publicized lynchings in Memphis, Tennessee, and Waco, Texas, along with attacks on black workers in East St. Louis, Illinois, the NAACP organized a march that some historians now call the beginning of the civil rights movement.

We spoke to Isabel Wilkerson, Pulitzer Prize-winning journalist and author of “The Warmth of Other Suns,” about the Silent Parade’s impact and the importance of mass protests.

What was the historical context of the Silent Parade?

If we were to scroll back 100 years, we would see that the country was in the midst of a major watershed moment known as the Great Migration. African Americans were arriving in great numbers to the big cities in the North and were recruited by northern industries. And they were also anxious to flee the Jim Crow South, to free the caste system in which they were born.

So that meant that thousands and thousands of African Americans were suddenly arriving to places like Chicago, East St. Louis, Detroit and New York. So when you look at the Silent March of beautifully-dressed African Americans, some carrying signs and walking wordlessly to the somber beat of the drum core, you recognize that they were expressing their citizenship, a citizenship that they had not been able to express before when they were restricted to the fields and the kitchens of the South. And so this was a display that has not been seen on this scale in the United States by people who had been held in a fixed place in the South.