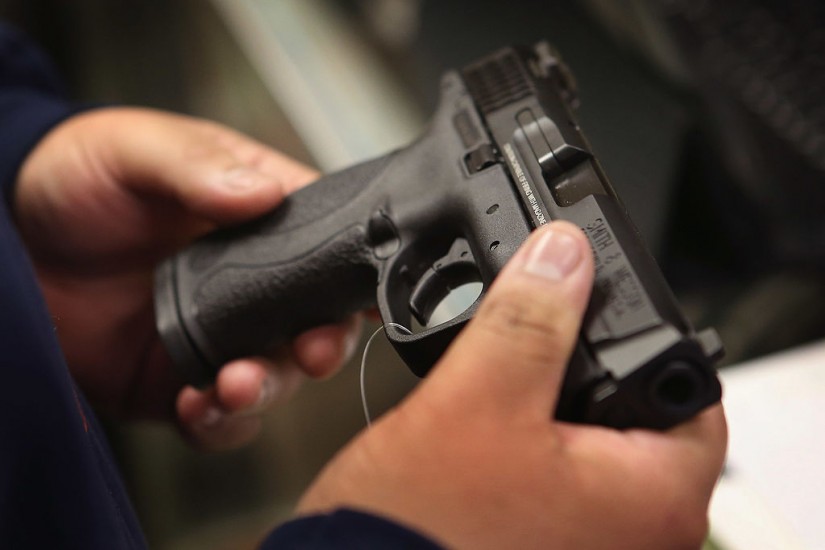 A customer shops for a pistol at an Illinois sporting goods store on December 17, 2012.
Scott Olson/Getty Images
…

In the nineteen-seventies, the N.R.A. began advancing the argument that the Second Amendment guarantees an individual’s right to carry a gun, rather than the people’s right to form armed militias to provide for the common defense. Fights over rights are effective at getting out the vote. Describing gun-safety legislation as an attack on a constitutional right gave conservatives a power at the polls that, at the time, the movement lacked. Opposing gun control was also consistent with a larger anti-regulation, libertarian, and anti-government conservative agenda. In 1975, the N.R.A. created a lobbying arm, the Institute for Legislative Action, headed by Harlon Bronson Carter, an award-winning marksman and a former chief of the U.S. Border Control. But then the N.R.A.’s leadership decided to back out of politics and move the organization’s headquarters to Colorado Springs, where a new recreational-shooting facility was to be built. Eighty members of the N.R.A.’s staff, including Carter, were ousted. In 1977, the N.R.A.’s annual meeting, usually held in Washington, was moved to Cincinnati, in protest of the city’s recent gun-control laws. Conservatives within the organization, led by Carter, staged what has come to be called the Cincinnati Revolt. The bylaws were rewritten and the old guard was pushed out. Instead of moving to Colorado, the N.R.A. stayed in D.C., where a new motto was displayed: “The Right of the People to Keep and Bear Arms Shall Not Be Infringed.”

Ronald Reagan was the first Presidential candidate whom the N.R.A. had endorsed. David Keene ran Reagan’s Southern campaign. Reagan’s election, in 1980, made it possible for conservatives to begin turning a new interpretation of the Second Amendment into law. As the legal scholar Reva B. Siegel has chronicled, Orrin Hatch became the chair of the Subcommittee on the Constitution, and commissioned a history of the Second Amendment, which resulted in a 1982 report, “The Right to Keep and Bear Arms.” The authors of the report claimed to have discovered “clear—and long-lost—proof that the Second Amendment to our Constitution was intended as an individual right of the American citizen to keep and carry arms in a peaceful manner, for protection of himself, his family, and his freedoms.”

In March of 1981, John Hinckley, Jr., shot Reagan, the White House press secretary, James Brady, a D.C. policeman, and a Secret Service agent. He used a .22 that he had bought at a pawnshop. A month later, the Times reported that Harlon Carter, then the N.R.A.’s executive vice-president, had been convicted of murder in Laredo, Texas, in 1931, at the age of seventeen.