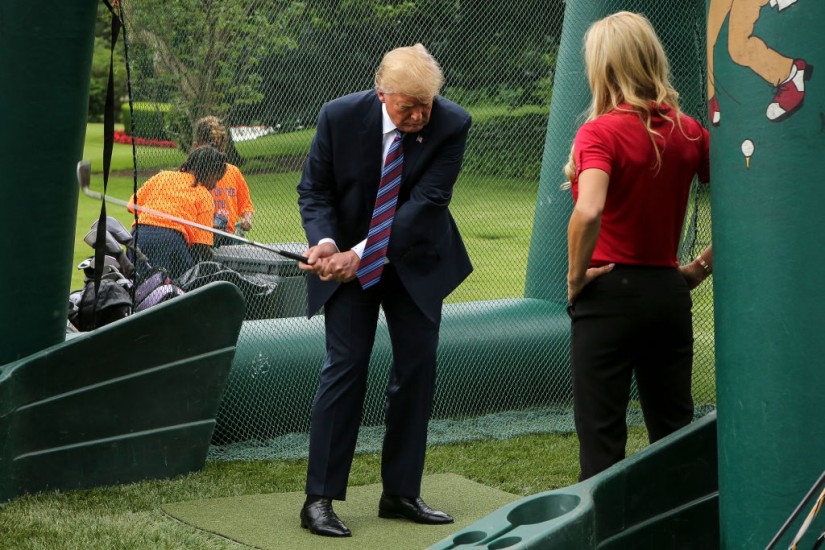 US President Donald Trump swings a golf club during the White House Sports and Fitness Day on the South Lawn on May 30, 2018 in Washington, DC. Golf remains one of the president's favorite pastimes.
Oliver Contreras-Pool/Getty Images
…

Donald Trump is almost always seen interacting with others, online and off. He seems to love the limelight, and his Twitter activity alone suggests he’s prone to spontaneity. So it comes as no surprise that the consensus among psychologists is that Trump is extroverted. The psychologist Dan P. McAdams, writing in the Atlantic, says Trump exhibits “sky-high extroversion.” Trump’s use of his downtime also seems to reflect this tendency.

It’s been noted that Trump has been playing a lot of golf since he became president. But unlike introverted presidents, such as Richard Nixon and Jimmy Carter, Trump hasn’t kept it to his family. He recently invited Japanese prime minister Shinzo Abe onto the golf course, for instance, and has been spotted playing with many businessmen.

On the other hand, Trump recently told a crowd in New Hampshire that he has “no friends.” This coincides with rumors that he is happy watching TV alone in the White House.

If Trump is, in fact, an introvert, he’s one of many that appears to have fooled onlookers into thinking he’s extroverted. He has managed to dedicate much of his spare time to building relations with other people. He is, after all, first and foremost a businessman.
* * *
We’re all guilty of taking it for granted now and then, but the concept of having time to oneself to socialize and indulge in hobbies hasn’t always been a given. It wasn’t until after the turn of the twentieth century, when workers were granted a half-day holiday on Saturdays, that leisure time started to become a part of everyday life. Since then, social scientists have found that what we do with our spare time isn’t just important for our well-being, but also that how we spend it can be quite revealing.