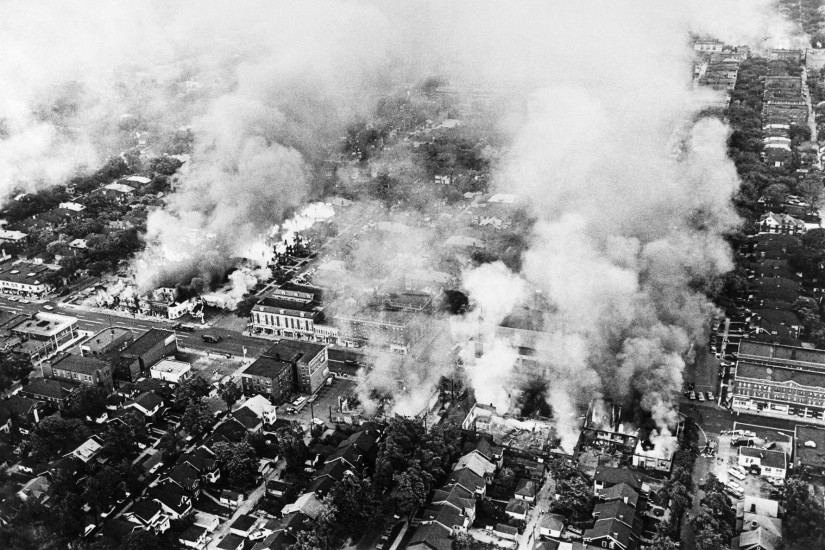 Aerial view of burning buildings in Detroit on July 25, 1967 during riots that erupted in Detroit.
AFP/Getty Images
…

One of those facts is something that's easier to see now than it was in 1967: The economic situation in Detroit was already set on a course toward the decline for which it is more recently famous. Locke says that it took him years to come to that conclusion. For a long time, he had thought that the subsequent decline of the once-vibrant city was a "direct result" of the riot, but he now believes that, if anything, it was the other way around.

"What I think we didn’t sufficiently recognize in 1967 is that we were right in the midst of the deindustrialization of Detroit, of the collapse of Detroit as the symbol of industrial America," he says. The beginnings of automation meant that major employers like Ford could turn out the same number of cars with fewer employees, and the factories began to restructure and move. "In retrospect it’s so easy [to see]. At the time, Detroit had always been the home of the industrial process, the manufacturing process at its best, so we just weren’t prepared to face the reality of what was going on."

Those changing economics were, he says, a key ingredient what happened in 1967 — and that's an opinion echoed by historian Thomas Sugrue, author of The Origins of the Urban Crisis and of a new introduction to an anniversary reissue of John Hersey's The Algiers Motel Incident.

Sugrue — who also questions the common wisdom that Detroit was the clear “worst” of the 1967 riots, as it was a proportionately larger city than Newark, for example, and flat numbers don’t reflect that difference — points out that Detroit and Newark both had deep histories of segregation, with large African-American populations in cities run by white-dominated governments. Both cities were already experiencing high degrees of disinvestment and depopulation, he says, well before the summer of 1967. And, as the process began, African-Americans tended to experience the worst of its consequences. “That’s another bit of conventional wisdom that’s completely wrong, that Detroit was thriving and then ’67 happened and all the whites left and all the businesses left. Detroit had been hemorrhaging jobs and population for at least 15 years,” he says.