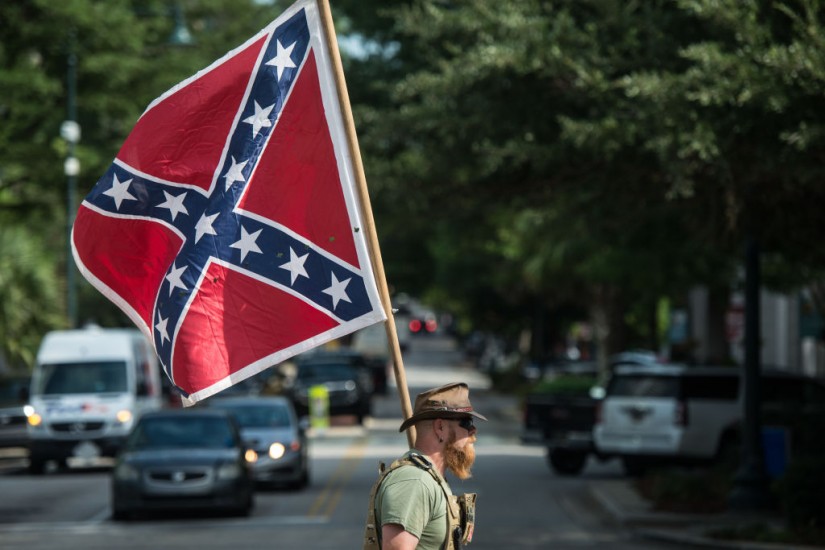 Fade in. The scene is South Carolina in 2015. Thousands of mourners fill the street to watch as a horse-drawn caisson is paraded to the Statehouse in Columbia. Scattered throughout the crowd are dozens of news crews reporting on the assassination of a black state representative and pastor who was shot to death in his church by a Confederate sympathizer. There’s a close-up as the coffin is unloaded and carried into the Statehouse. The camera then zooms out to reveal a flagpole on the Statehouse grounds and the Confederate battle flag flapping in the wind at full mast.

Of course, the scene I just described isn’t a movie scene at all, but events that took place just two years ago on June 24, 2015. The Confederate battle flag continued to fly above the U.S. and South Carolina State flags, which had been lowered to half-staff even as President Obama delivered a eulogy for Clementa Pinckney in Charleston two days later. Addressing a room that included the governor of South Carolina and many other high-ranking officials, the president stated that “Removing the flag from this state’s Capitol … would simply be an acknowledgment that the cause for which [the Confederacy] fought — the cause of slavery — was wrong.”

For a nation that had supposedly settled the issue of slavery in a Civil War 150 years ago, it seems odd that this statement would be necessary in 2015. (I can’t recall a time, for instance, when a president had to issue a clarifying statement that the United States was on the right side of the Revolutionary War and therefore a monument to King George III was inappropriate in the Capitol.) Perhaps that’s because most wars end with one side being clearly defeated, its cause and ideology clearly rejected. By contrast, thanks to monuments, nostalgia and sociopolitical realities that still remain, America has yet to definitively part ways with its Confederate past.

Perhaps this is why HBO’s recent announcement of a new show called “Confederate,” which presents an alternate history in which the Confederacy won the Civil War, struck many, including myself, as completely tone-deaf to historical reality. It frankly doesn’t require much imagination to fantasize a world where the Confederacy remained undefeated.