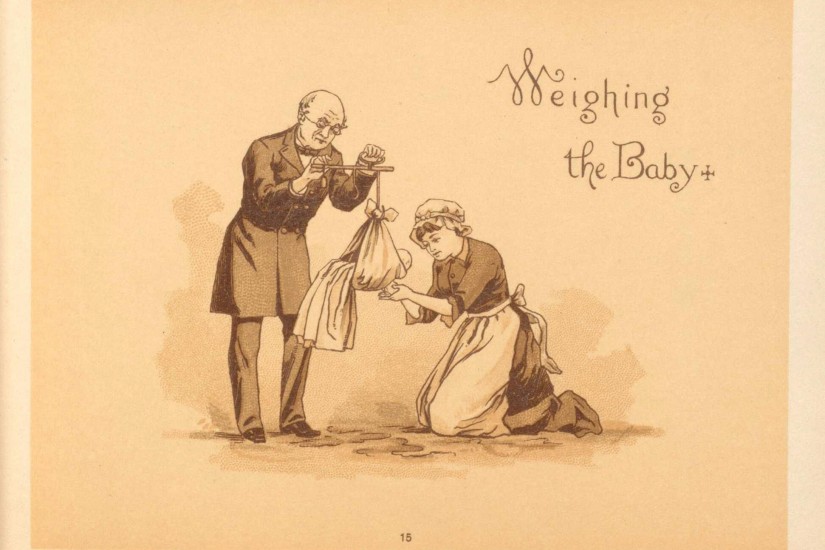 Ezra Stiles, a Yale-educated minister in colonial Rhode Island, weighed and measured each of his children at birth and at regular intervals thereafter. Once he weighed the children before breakfast and again after dinner to see how much they had gained that day. But Stiles, who was a friend of Benjamin Franklin, was hardly typical in this regard. In her study of early American diaries, Laurel Thatcher Ulrich found that childbirths and baby weights were mentioned casually, if at all. For example, my wife was "delivered of a son" and I "sold a Cow," wrote a New Hampshire farmer in 1755. A midwife in Maine noted in passing that George Thomas's son was "more than the lite side of Mr. Densmore's stilyards would weigh." (A stilyard, or steelyard, is an unequal-arm weighing instrument, while a balance has two arms of equal length. Both forms are of ancient origin, and both are still used today.)

The practice of baby weighing picked up somewhat in the early 19th century. The Boston Medical Intelligencer advised physicians to record the birth of each infant, with weight and peculiarities of structure or condition, and to update this record annually. Like Stiles before him, the author of this 1826 article had no theory to test, but trusted that patterns would emerge from masses of data. Advertisements for bibles with pages designed for registering vital statistics first appeared about the same time.

Popular attention to the subject increased markedly after the Civil War. Readers of Godey's Lady's Book learned about a "wee morsel of a baby" trussed up in papa's new bandanna handkerchief and "swung from the hook of a pair of steelyards, as if it had been born into cannibal country, and were to be disposed of in the shambles, at so much per pound." "Weighing the Baby"—a poem by Ethel Lynn (aka Ethel Lynn Beers)—celebrated the emotional weight of parental love as well as the physical weight of the child. John Rogers's "Weighing the Baby"—a whimsical plaster statuette introduced in the U S. centennial year of 1876—was a big hit, with thousands of example sold. The Family Record, Biographic and Photographic (1868) was designed to hold photographic portraits, as well as data on heights and weights at different ages.