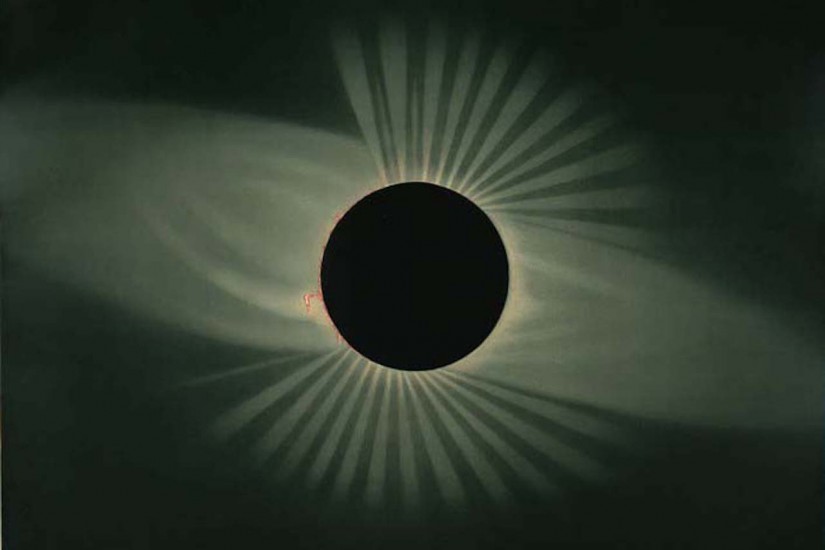 In 1878, crowds from all across the country gathered in a path of totality that spanned from Montana to Texas. In addition to the tourists who traveled specifically to experience the celestial event, many of the scientific luminaries of the day also made the journey. Thomas Edison headed to the Wyoming Territory to test out his new tasimeter, an early attempt at detecting infrared radiation. Other groups of scientists headed to locations nearer the ends of the path in Texas or Montana. But the lion’s share of astronomers and scientists traveled to Colorado.

One group of researchers made their way to the summit of Colorado’s Pike’s Peak. This group included Cleveland Abbe, who is today known as the father of the National Weather Service. “He was trained as an astronomer, but he became a meteorologist, and he became the first weather forecaster for the U.S. government,” says David Baron, author of American Eclipse: A Nation’s Race to Catch the Shadow of the Moon and Win the Glory of the World. “He climbed Pike’s Peak in 1878 to witness the eclipse and nearly died.”

Abbe began his professional career as an astronomer, becoming director of the Cincinnati Observatory in 1868. But he soon became better known for his daily weather forecasts, the first such private predictions in the nation, which he would create based on climate information telegraphed in from outside observation stations. As he provided them to Cincinnati newspapers and other subscribers, they earned him the terrific nickname “Old Probabilities,” or “Old Probs.”

When the cash-strapped Cincinnati Observatory could not afford to maintain Abbe’s meteorological soothsaying, he moved his operation to Washington, under the auspices of the brand new United States Weather Bureau, of which he was made the first chief meteorologist. The bureau was part of the U.S. Army Signal Corps, which was the official body in charge of monitoring the country’s weather. Under this new meteorological body, Abbe gave his first official weather report in 1871, and quickly became the leading meteorologist in the country.