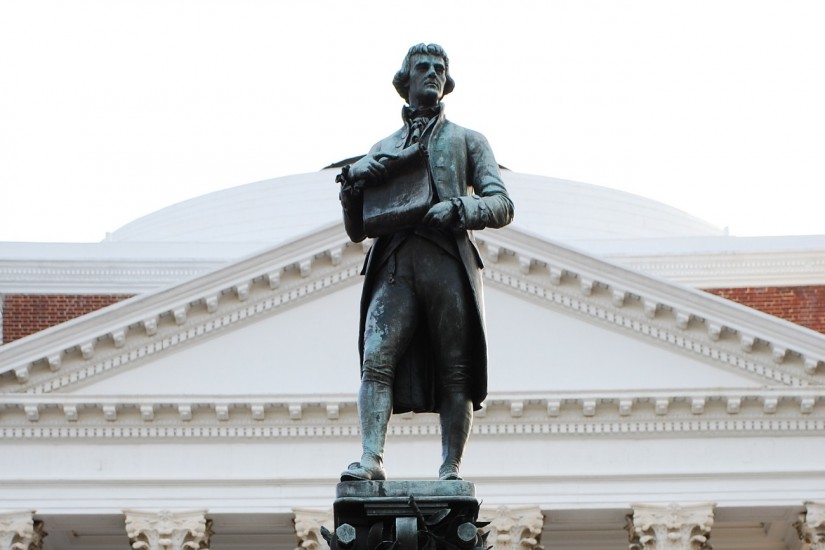 Statue of Thomas Jefferson at the University of Virginia.
Adam Fagen/Flickr
…

Would Jefferson have defended Charlottesville’s decision to remove his cousin’s statue? Or would he have grabbed a torch, chanted “Unite the Right” and lectured reporters about white genocide — the rallying cry of white nationalists these days?

Matters of slavery and race deeply conflicted Jefferson. He despised slavery almost as much as he despised losing his luxurious lifestyle outside of Charlottesville. He seemed to like and dislike both freedom and slavery, and he never divorced himself from either.

His words could thrust him to either side of our current debate. He regularly responded to anti-slavery letters by saying “no body wishes more than I” to see the end of prejudice and slavery. But Jefferson also wrote in Notes on the State of the Virginia in 1785 that “incorporating [freed] blacks into the state” was out of the question, was suicidal. Because, he surmised, it “will divide us into parties, and produce convulsions, which will probably never end but in the extermination of the one or the other race.”

These are the words that South Carolina legislators used when citing their reasons for secession on December 24, 1860. They expressed fears of abolitionists “inciting” contented captives into “servile insurrections” that harmed white people. And today, these ideas permeate the rhetoric of white nationalists who espouse fears that non-white immigrants, Muslims, antiracist policies and Black Lives Matter activists are exterminating the white race (and blue lives). White nationalists marched around University of Virginia late Friday night chanting: “You will not replace us.”

Thomas Jefferson is everywhere and nowhere in Charlottesville. Truly, after all these years, Jefferson’s beloved city and his beloved nation are suffering at the hands of his two warring children: the older child of bigotry and the younger child of equality.

He does not have a choice of sides. But we do. And history will one day judge us as history judges Thomas Jefferson today.