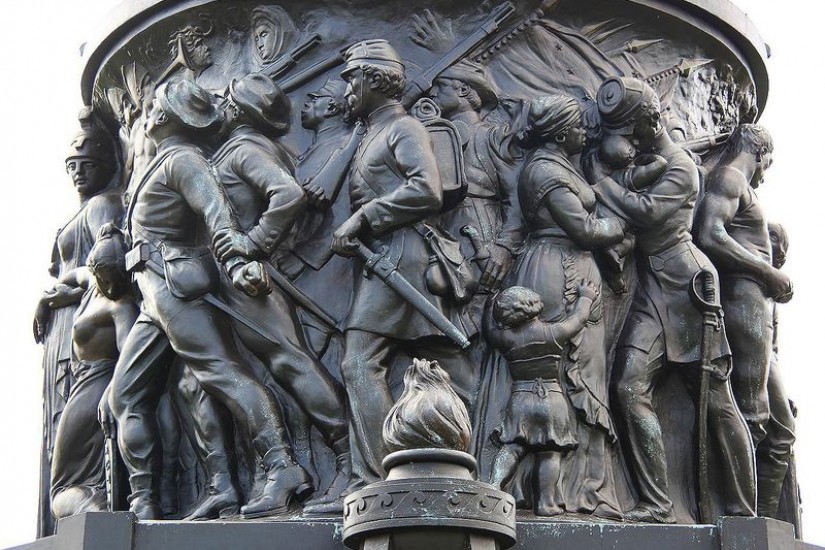 A depiction of a slave woman with a baby on the Confederate Monument at Arlington National Cemetery.
Wikimedia Commons
…

But if we only focus on monuments that honor Confederate leaders, we miss the many monuments and memorials that intentionally distort history by presenting a false narrative of the “loyal slave.” Well into the 20th century, “Lost Causers” relied on this idea to clearly justify maintaining and extending the ideology of white supremacy. In 1895, local cotton mill owner Samuel E. White and the Jefferson Davis Memorial Association dedicated a memorial in Fort Mill, South Carolina, to honor the "faithful slaves who loyal to a sacred trust toiled for the support of the army with matchless devotion and sterling fidelity guarded our defenceless homes, women and children during the struggle for the principles of our Confederate States of America."

In 1931, the United Daughters of the Confederacy (UDC) and the Sons of Confederate Veterans (SCV) erected a memorial to Heyward Shepherd, a free black man who was accidentally killed by John Brown's men during the October 1859 failed slave rebellion at Harpers Ferry. Shepherd worked as a porter in the town's railroad station, but in the words of the SCV and UDC represented "the character and faithfulness of thousands of negroes who, under many temptations throughout subsequent years of war, so conducted themselves that no stain was left upon a record which is the peculiar heritage of the American people..."

These monuments promulgate the idea that the Confederate cause united both races against invading Yankee hordes. In doing so, they reinforce a myth that ignored the many ways that enslaved people undermined the Confederate war effort, most notably by running off to the Union army and fighting against their former oppressors.