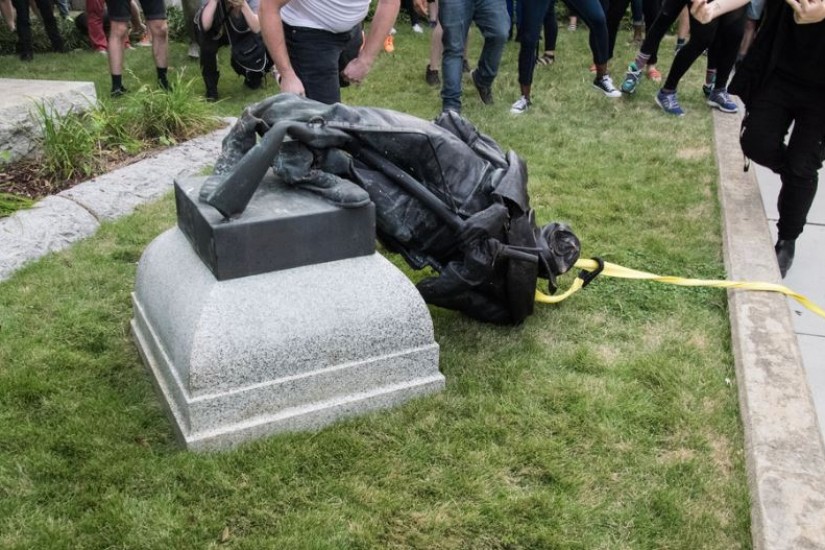 The flag’s origins date back to 1861. Shortly after the first armed conflicts of the Civil War, Confederate general P. G. T. Beauregard— after whom, along with Jefferson Davis, current Attorney General Jefferson Beauregard “Jeff” Sessions is named — ordered William Porcher Miles to create a battle flag that “would be entirely different from any State or Federal flag.”

Both Beauregard and Miles were wealthy and politically connected members of the Southern ruling class. Like Jefferson Davis, the president of the short-lived Confederate States of America, Beauregard and Miles were men whose fortunes and power rested on the continued exploitation of black slave labor to produce cash crops such as cotton and tobacco. Indeed, slaveowners made up the bulk of the very wealthiest people in the United States at the time.

The same cannot be said for most of the hundreds of thousands of soldiers who died fighting for the Confederate Army. Most of these men were poor subsistence farmers. Few of them had any real political power. What did they die for?

The simplest answer is that they died defending slavery — a racist institution built upon the premise that black people were mere instruments of production. But in doing so, however, these men also betrayed their own class and themselves — all for the sake of protecting the wealth and power of a tiny ruling class who looked upon them with scorn.

From the beginning of the Confederacy, the Southern ruling classes fretted over whether they could win over masses of poor, non-slaveowning whites to their cause. This, of course, is the problem every minority ruling class in history has had to face — the problem of how to make the sectional, particular interests of the ruling elite appear to be the universal interests of all. But the context of war — when significantly greater sacrifices will be required of the masses than is normal — makes this problem even more acute.