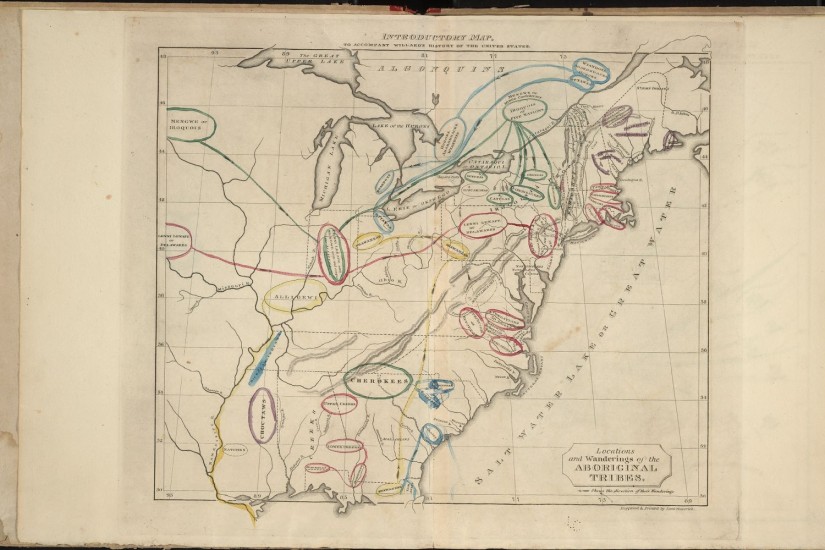 "Locations and Wanderings of the Aboriginal Tribes," a map from Emma Willard's "History of the United States, or Republic of America," 1828.
Geography & Map Division/Library of Congress

As I wrote in the first installment of this series, women have been participating in cartography about as long as any man has. That means women have been using maps to convey ideas and agendas—for better or for worse, conscientiously or unwittingly. For a map is never neutral. Sometimes, it is plainly propaganda. Other times, its bias is subtle enough for it to pass as scientific artifact.

In the explosive 19th century, women produced maps (entire atlases, actually) that attempted to make sense of America’s relatively new nationhood, its boundaries and beliefs, and who belonged there. In the maps presented here, women cartographers conveyed both facts and fictions about a country in upheaval, and developed new visual techniques in the process.

The early 19th-century cartographer, historian, educator, and women’s rights activist Emma Hart Willard pioneered new techniques for teaching geography and producing maps. She advocated a localized approach to learning one’s land, contrary to the era’s common practice: “Instead of commencing the study of maps with the map of the world, which is the most difficult to understand,” she and co-author William Woodbridge wrote in 1844’s Woodbridge and Willard's Universal Geography, “the pupil here begins, in the most simple manner imaginable, to draw a map of his own town.

In her own maps, Willard stuck to representations of the United States, and in this she was not without her prejudices. In one of her widely sold geography “readers,” she innovated new cartographic techniques while also reinforcing dominant assumptions about Native Americans. Pictured above, “Locations and Wanderings of the Aboriginal Tribes,” is the “Introductory Map” in 1828’s Willard’s History of the United States. The map uses colors and vectors to show settlement and movement patterns of Native Americans in the Eastern U.S.—an unprecedented visual strategy for mapping American history that “re-conceptualize[d] the past on a plane rather than in a narrative,” writes the historian Susan Schulten in the Journal of Historical Geography.