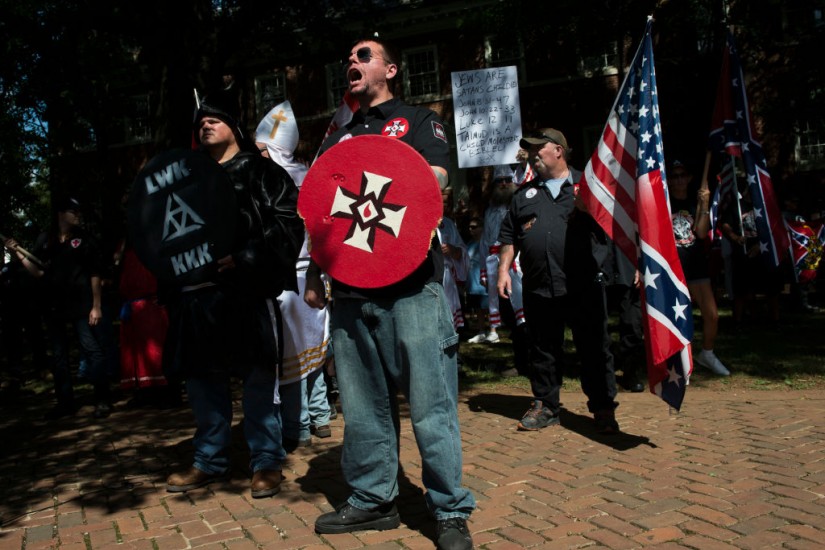 A member of the Ku Klux Klan shouts at counter protesters during a rally in support of Confederate monuments.
Andrew Caballero-Reynolds/Getty Images
…

The appropriation of faux-medieval culture by modern racists happens everywhere. The Nazis did it when they used medieval-obsessed German Romanticism of the nineteenth century (Wagner, fairytale castles) as a template for a new national identity that was founded on the extermination of minority groups. White nationalists do it in Britain and France when they want to claim that the country “belongs” somehow to white people, looking back to an imaginary time of long-lost racial purity (a time that never existed, as Mary Beard patiently explained recently). White supremacist American murderers love Vikings.

Medieval studies scholars and cultural historians call this practice “medievalism” because it doesn’t actually refer to a real time or place in history: It’s all about fantasies, most of them set in an imaginary past that bears little resemblance to the real one. The white supremacists who gathered in Charlottesville this weekend wore their medievalism on their sleeves. Medieval studies scholars of my acquaintance have been noting particular far right tropes on Facebookand Twitter, pointing out how they like to design little “heraldic” crests for their organizations. They take symbols like the “fasces” of fascism and cross them like swords and paint them on shields like crusaders. In the photograph above, Matthew Heimbach carries a shield engraved with the bastardized “Celtic cross” that the Norwegian Nazis designed to look like the high crosses of early medieval Ireland and Britain. And the KKK, after all, has always had “white knights.” (The SLPC has compiled a helpful index of the far right symbols used over the weekend.)

For scholars of medieval studies, it can be tempting to “fact check” such appropriations, at least in part because white supremacy represents a grotesque abuse of something for which they care deeply. And in some examples, racist medievalism can be not just morally abhorrant, but also deliciously stupid. As the excellent Twitter account @medievalpoc pointed out, certain factions at Charlottesville have appropriated the Black Eagle of the Holy Roman Germanic Empire, which is strongly associated with its patron saint, Saint Maurice. Who was black.