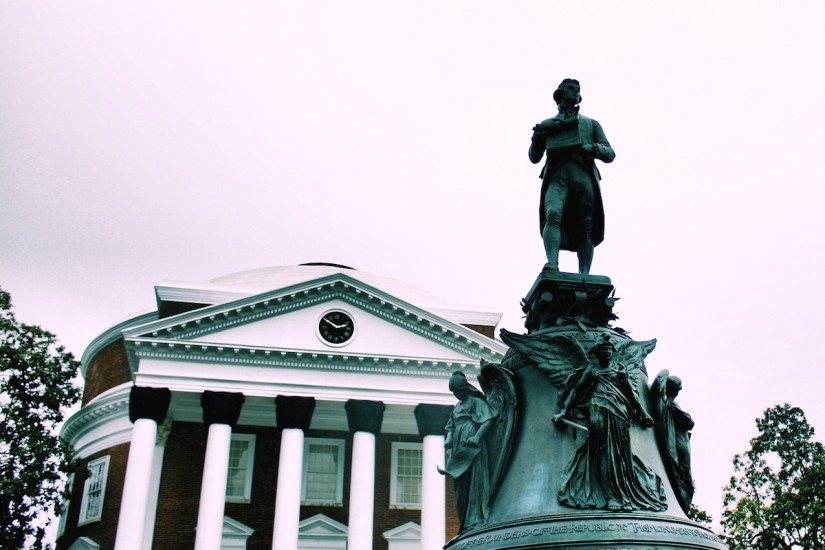 Thomas Jefferson statue at the University of Virginia.
flickr.com/tabor-roeder
…

I mention these things to say that the national tragedy that unfolded in Charlottesville last week struck at every aspect of my being—a black person, a friend, an American, and a scholar who has devoted many years to studying Jefferson, slavery at Monticello, and, by extension, Charlottesville. I knew instantly why the men holding tiki torches felt the need to make their case for white supremacy by walking toward the statue of Jefferson that stands in front of the Rotunda he designed for the university he dreamed about and then founded. I also knew instantly that there was a reason the much less remarked upon “counterprotesters” surrounded Jefferson’s statue to keep the tiki torchers from reaching it, staking a defiant claim, in the face of superior numbers, to ideas about human equality and progress that they correctly perceived were under siege that night. I venture that it was not necessarily the man himself, but the ideas associated with him that mattered, and warranted forming a protective barrier around his statue. I have no doubt that the people trying to keep the tiki torchers away from the statue know about the problematic sides of Jefferson. And surely some of the torch-bearers might be troubled about Sally Hemings, although denial may provide a refuge for them. As historians like Merrill Peterson in the late twentieth century and Francis D. Cogliano in the early twenty-first have observed, Americans have been trying to claim, or use, Jefferson in one way or another from the time of his death in 1826 up until this very moment.