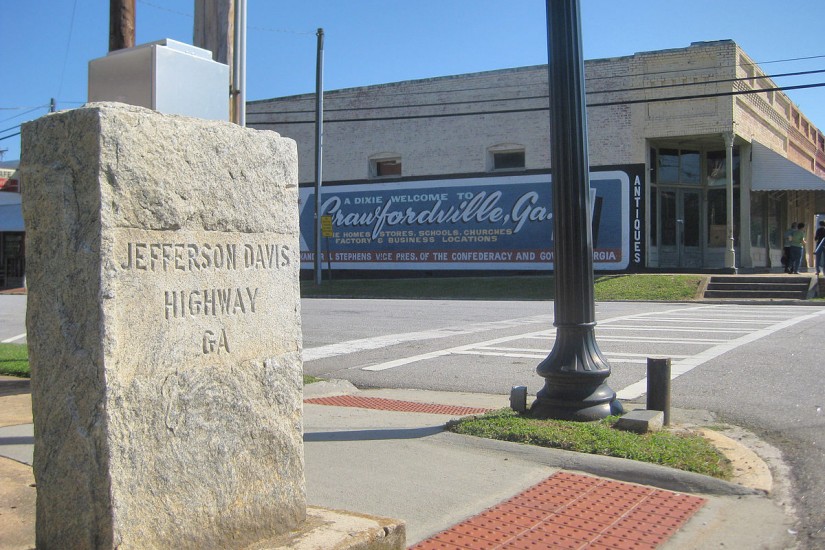 The largest monument to the Confederacy is not made of bronze. It’s paved in asphalt.

For over a century, portions of America’s road system have paid tribute to a failed slaveholding rebellion in the form of the Jefferson Davis Highway. Once planned as a single transcontinental highway, a series of roads that today bear Davis’s name run for hundreds of miles through the South, while dozens of markers to the original highway are spread out across the country — from Virginia through the old Cotton Belt, then westward across Texas, New Mexico, Arizona and into California.

Cutting through the southern half of the country, the Jefferson Davis Highway serves as a reminder that the fight over Civil War memory took place not only in the statues dotting parks across America, but in the very infrastructure of the nation itself. The highway is an asphalt monument to false equivalency, designed to balance the Lincoln Highway in the North with a Confederate rival in the South. It reveals the extent to which activists in the early 20th century embedded their defense of the Confederacy in the growing infrastructure of the country.

The origins of this road system date to 1913, when the United Daughters of the Confederacy (UDC) unveiled their plans for a coast-to-coast highway in honor of the rebel chieftain. The project was intended as a rival of sorts to the then-recently announced Lincoln Highway from New York to San Francisco, which was backed by Northern capital. Not to be outdone by Yankee entrepreneurs, the UDC sketched out a Southern analogue that would stretch from Arlington, Va., to San Diego — what writer Erin Blakemore recently called a “superhighway of Confederate veneration.” The sectional animosities of the Civil War era thus lived on in the mapping of America’s first national highway systems.