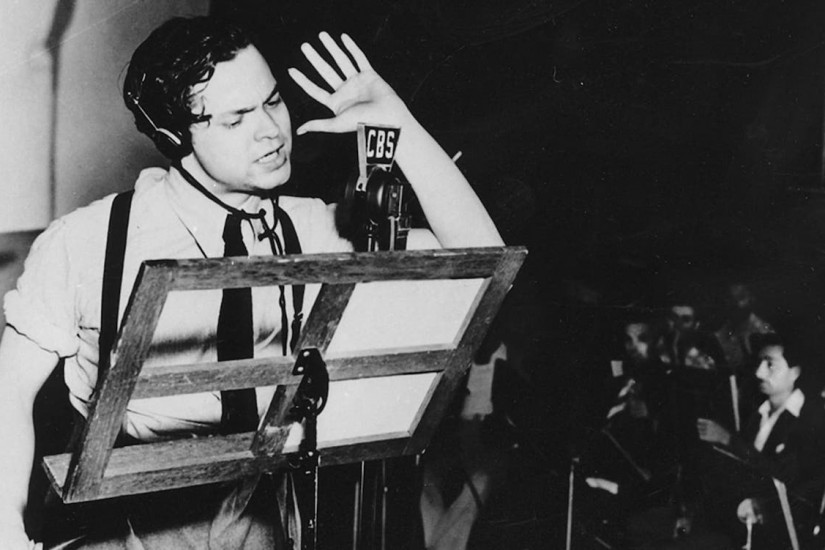 Orson Welles performs H.G. Wells' "The War of the Worlds" at CBS Radio's Studio One on Oct. 30, 1938.
Associated Press

Donald Trump’s victory has been a demonstration, for many people, of how the Internet can be used to achieve those very ends. Trump used Twitter less as a communication device than as a weapon of information warfare, rallying his supporters and attacking opponents with hundred-and-forty-character barrages. “I wouldn’t be here without Twitter,” he declared on Fox News in March. Yet the Internet didn’t just give him a megaphone. It also helped him peddle his lies through a profusion of unreliable media sources that undermined the old providers of established fact. Throughout the campaign, fake-news stories, conspiracy theories, and other forms of propaganda were reported to be flooding social networks. The stories were overwhelmingly pro-Trump, and the spread of whoppers like “Pope Francis Shocks World, Endorses Donald Trump for President”—hardly more believable than a Martian invasion—seemed to suggest that huge numbers of Trump supporters were being duped by online lies. This was not the first campaign to be marred by misinformation, of course. But the sheer outlandishness of the claims being made, and believed, suggested to many that the Internet had brought about a fundamental devaluing of the truth. Many pundits argued that the “hyper-democratizing” force of the Internet had helped usher in a “post-truth” world, where people based their opinions not on facts or reason but on passion and prejudice.

Yet, even among this information anarchy, there remains an authority of sorts. Facebook and Google now define the experience of the Internet for most people, and in many ways they play the role of regulators. In the weeks after the election, they faced enormous criticism for their failure to halt the spread of fake news and misinformation on their services. The problem was not simply that people had been able to spread lies but that the digital platforms were set up in ways that made them especially potent. The “share” button sends lies flying around the Web faster than fact checkers can debunk them. The supposedly neutral platforms use personalized algorithms to feed us information based on precise data models of our preferences, trapping us in “filter bubbles” that cripple critical thinking and increase polarization. The threat of fake news was compounded by this sense that the role of the press had been ceded to an arcane algorithmic system created by private companies that care only about the bottom line.