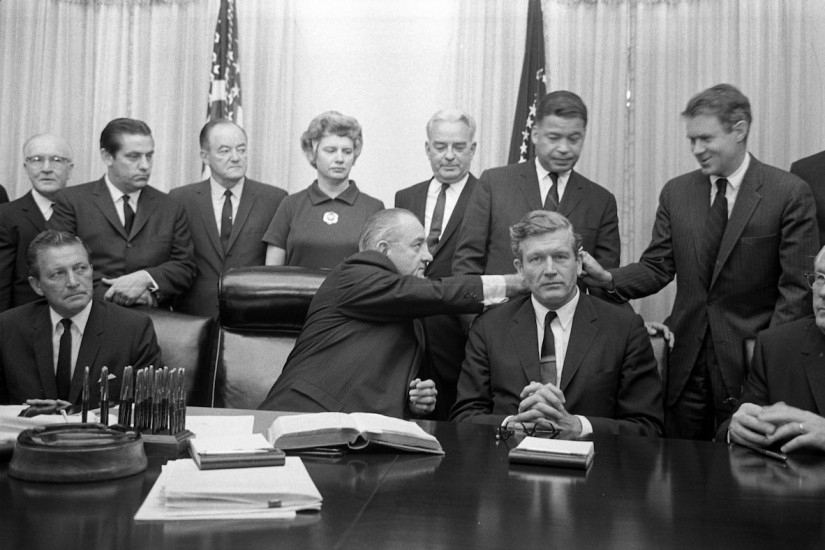 President Lyndon B. Johnson with members of the National Advisory Commission on Civil Disorders, including Otto Kerner (near left), in 1967.
(Marion S. Trikosko/Library of Congress
…

During the early morning of July 23, undercover cops raided the speakeasy during a party for returning Vietnam veterans. As his arrested father was being led away, Scott, 19 at the time, got agitated. “You don’t have to treat them that way,” Scott reportedly yelled at the officers. “They can walk. Let them walk, you white sons of bitches.” He climbed atop the hood of a car and began to address an increasingly frenzied crowd. “Are we going to let these peckerwood motherfuckers come down here any time they want and mess us around?” Then he threw the bottle, he wrote, hoping to hit a police officer. It smashed on the ground, then everything went to hell. Over the next five days, black Detroit revolted. Forty-three people died.

Out of that cataclysm came the Kerner Report, which had a mandate to decipher African American outrage for the masses. As the 12th Street Riot raged on, President Lyndon Baines Johnson formed the National Advisory Commission on Civil Disorders to answer three questions about racial unrest in Detroit, Newark, and Watts before them: “What happened? Why did it happen? What can be done to prevent it from happening again?” Its key conclusions, however, went well beyond the procedural responses to such questions. “This is our basic conclusion,” the commission wrote in its introduction to the report. “Our nation is moving toward two societies, one black, one white?—?separate and unequal.” That oft-quoted passage may sound profound, but it is easy to imagine most black Americans at the time reading that and saying, “Is moving toward? We’re already there!” This spotlights a key truth about the commission and its findings, which is that they were never meant for black consumption. Most black Americans were intimately familiar with the conditions and problems it was introducing to its intended readership. The Kerner Commission book became an instant bestseller and it was viewed by many as a watershed moment in America’s long-standing racial strife. And yet looking back, it doesn’t appear to have been the racial panacea many thought it would be. The conditions it describes?—?police brutality, economic strife, hopelessness among African American urban communities?—?have continued, and in many ways become more entrenched. And on top of that, America’s internal struggle with race has only become more virulent and deadly. The Kerner Commission reported on serious issues. But because of a variety of political factors it seems to have stopped short of actually effecting change.