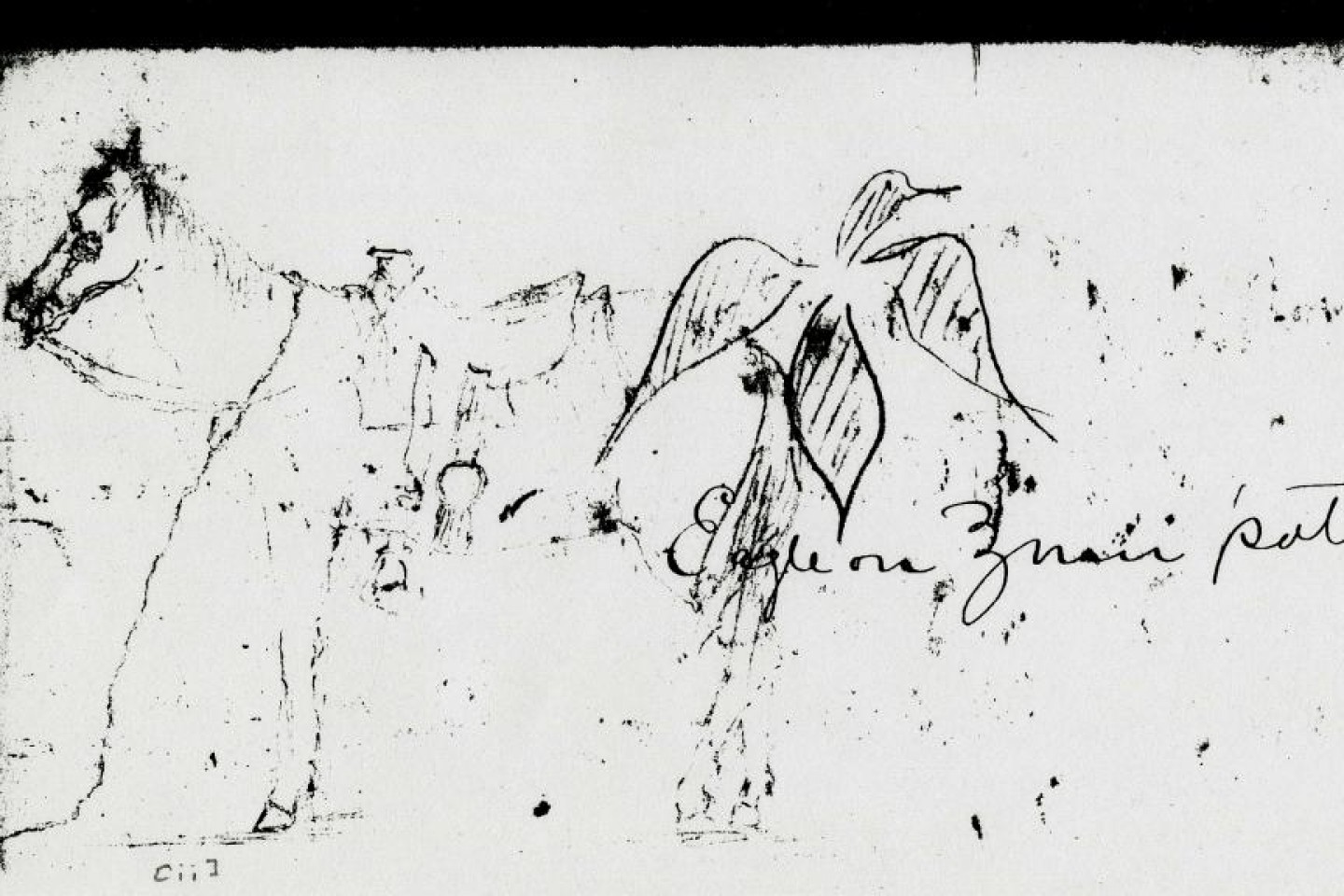 On a November night in New Mexico, 1881, a team of Zuni dancers transformed the living room of a U.S. Army officer into a ritual site.

Ten men and two boys entered the darkened space. The dancers in the center of the group were stripped to the waist, wild turkey feathers tied in their hair, white bands of paint striping their eyes, mouths, arms, and legs. Each wore a tortoise shell rattle tied below the right knee, and each held a “wand made of an ear of corn” in their right hand. One had tied corn husks over his ears. Another was clad in “a long India-rubber gossamer ‘overall,’... with a pair of goggles, painted white, over his eyes.” A third was dressed as a young woman.

The remaining dancers, our source tells us, “were arrayed in old, cast-off American Army clothing.”

The dancers worked improvisationally, but also followed a fixed pattern. First there was a group song, “apparently a ludicrous reference to everything and everybody in sight.” Then “an outlandish but faithful mockery of a Mexican Catholic congregation at vespers.” This performance generated huge laughs from the audience of around 100 Zunis, but left the three “Americanos” in the room transfixed with confusion.

One of them was a cavalry officer. He privately wondered whether the dancers were specifically mocking him, and what he called his “stained glass attitude.”

Suddenly the dancers exited, and attendants sprinkled the floor with water. When the twelve figures returned, two were naked. They sang a “very peculiar [song]…. like a chorus of chimney sweeps,” and their dance became “a stiff-legged jump.” One of the three American audience members, an ethnologist named Frank Hamilton Cushing, knew his cue. Cushing stood up and announced, in the Zuni language, a “feast.” Women emerged carrying dishes of tea and sugar.

Then, to the shock of Cushing’s cavalry officer companion, another dish was produced. “An olla of urine,” which the dancers took turns drinking.

“Amid the roaring merriment of the spectators,” the officer recalled, they “announced that it was very, very good.”

The cavalry officer was disgusted. But he was also paying rapt attention. The “Zuni urine ceremony,” as he called it, was to become a life-changing obsession. When the officer reached the end of his short life, some fifteen years later, he would be remembered not only as a soldier, but also as an anthropologist.

The study of urine, shit, and religion.

John Gregory Bourke, a son of Irish Catholic immigrants to Philadelphia, lied about his age to a recruiter and enlisted in Union Army in the summer of 1862. He was 16 years old. That winter, he distinguished himself at the Battle of Stones River and became one of the earliest and youngest recipients of the Medal of Honor. Nominated to West Point at the end of the war and promoted to the officer corps thereafter, Bourke was sent west in 1869. Serving first in New Mexico and then in in Arizona, California and Nebraska, Bourke participated in the bloody campaigns waged by the U.S. military against the Sioux, Apache, and Cheyenne peoples, among many others.

And here his biography would have ended, were it not for the second calling that Bourke found in the pueblos of New Mexico. It was here, conversing with ethnologists like Cushing, that John Gregory Bourke discovered his new passion.

The written word had always come easily to Bourke. He had kept a voluminous diary since his Civil War days. Following the 1885 publication of Ulysses S. Grant's wildly popular memoirs, Bourke published his accounts of campaigns against the Apaches alongside the U.S. Army’s famed “Indian fighter” General George R. Crook.

Throughout this period, Bourke was developing a more esoteric set of literary interests. Ten years after his first encounter with the Zuni dance, these interests culminated in the publication of a truly unusual work: a privately-printed book called Scatalogic Rites of All Nations. 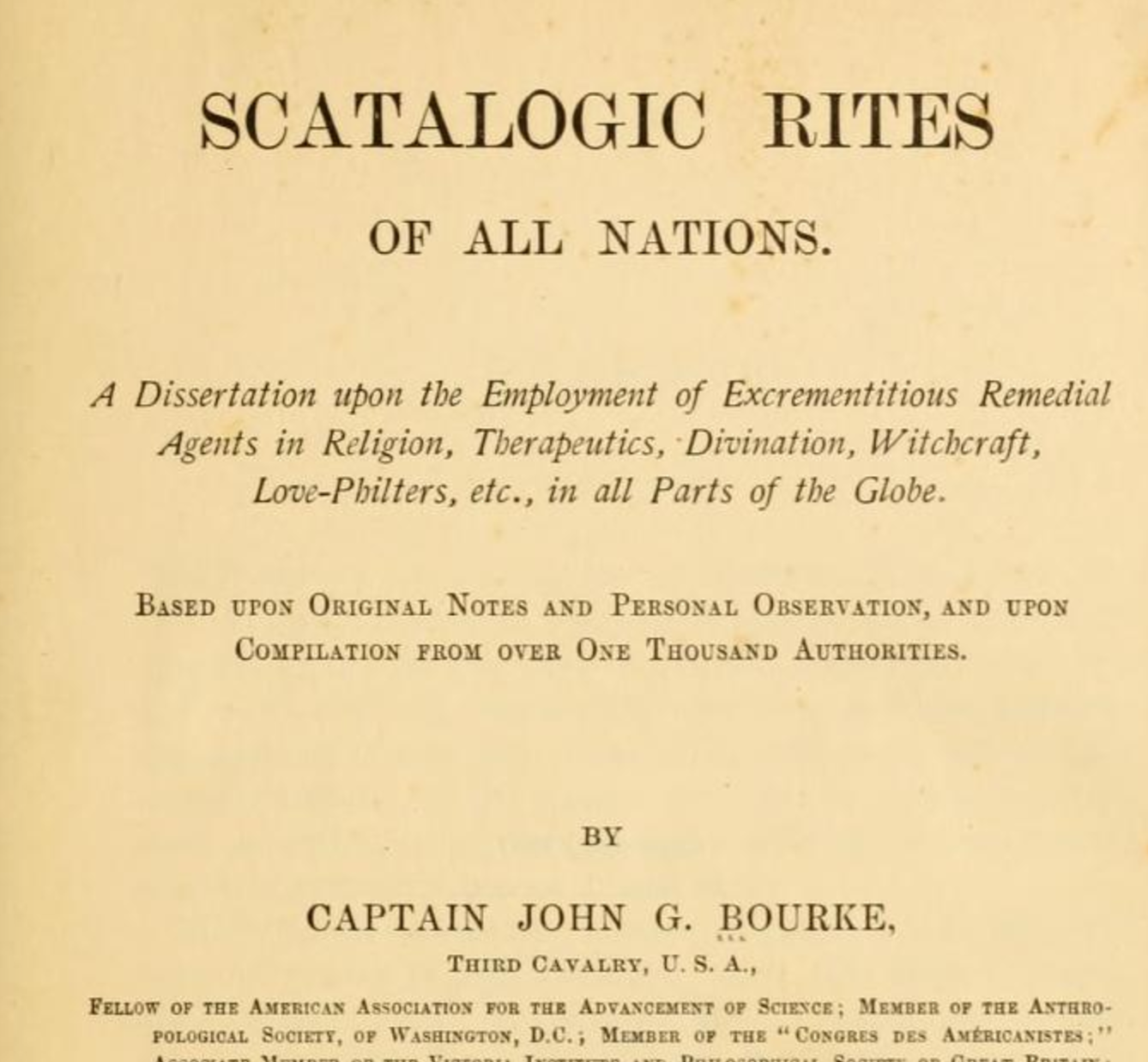 Copies of Bourke’s book were exceedingly rare, and it merited little mention in the press. However, in 1913, some 17 years after his death, Scatalogic Rites re-appeared in a German translation. Here, in an introductory forward, Bourke’s study won approval from no less an authority than Sigmund Freud. Although the German psychoanalyst found fault with some of Bourke’s assumptions, he also saw much to praise. “To make [the role of excretion in human life] more accessible,” Freud claimed, “is not only a courageous but also a meritorious undertaking.”

But what exactly did Bourke’s undertaking amount to?

The first thing that a modern reader might notice about the book is its stilted style of writing. (Scatologic Rites has been digitized and is available for download at the Internet Archive.) Bourke’s tone was a strange combination of the lurid and the aggressively dry. We find this dichotomy on the book’s very first page, which opens with an offputtingly run-on sentence that manages to land on the term “ur-orgies”:

The object of the present monograph is to arrange in a form for easy reference such allusions as have come under the author's notice bearing upon the use of human or animal ordure or urine or articles apparently intended as substitutes for them, whether in rites of a clearly religious or 'medicine' type, or in those which, while not pronouncedly such, have about them suggestions that they may be survivals of former urine dances or ur-orgies.

This dichotomy went deeper than language. Bourke seemed to embody the larger contradictions of the Gilded Age. Beneath an obsession with decorous and gentlemanly behavior lay a deep well of violence, as well as a fascination with filth. These were the dark undercurrents that would be surfaced by Freud and Jung in the following decades, just starting to be made visible.

In a working life bookended by the Civil War and the frontier slaughters of the 1870s and 80s, Bourke also embodied a distinctively American paradox. He was an unrepentant jingoist, who was at the same time highly sensitive to the complexity and beauty of the cultures that he and his comrades were in the process of destroying. In an early passage from his diary, prior to his revelatory experiences with indigenous religious practices, Bourke was unabashedly genocidal in tone. “The sooner the manifest destiny of the [white] race shall be accomplished and the Indian as an Indian cease to exist, the better,” he wrote.

But within a few years, the same hand that wrote these terrible words would begin to record close observations of people it had once worked to exterminate.

Bourke’s transformation from an avatar of Manifest Destiny to a chronicler of indigenous lifeways foreshadowed a larger shift. With the advent of “Cowboys and Indians” pulp fiction literature and the lore of groups like the Boy Scouts of America (founded in 1910), the bigotry that characterized earlier decades was reconfigured into a fuzzy frontier mythology. Bawdlerized versions of indigenous cultural practices – no longer seen as a direct threat to national interests – were taken up with gusto by children whose parents and grandparents had once reviled native peoples.

Meanwhile, indigenous and non-Christian rituals became reimagined as steps on a continuous path stretching from savagery to civilization. Bourke's interest, at least on the surface, emerged out of this fascination with civilizational uplift. Scatalogical Rites documented not only indigenous cultures of the American West, but practices from ancient and medieval Europe as well. It was part of a larger hubris, on the part of the West, that they had left the dark, noisome, smelly, and discomfiting elements of human existence far behind them.

It was a blind spot that wouldn’t last. The translation of Bourke’s work into German appeared just months before the outbreak of World War 1. A few decades later, the pueblos and plateaus frequented by Bourke and other early ethnographers would become staging grounds for nuclear tests.

In the pas de deux between shit and civilization, it became, once again, too soon to declare a winner.

Further reading in the public domain: