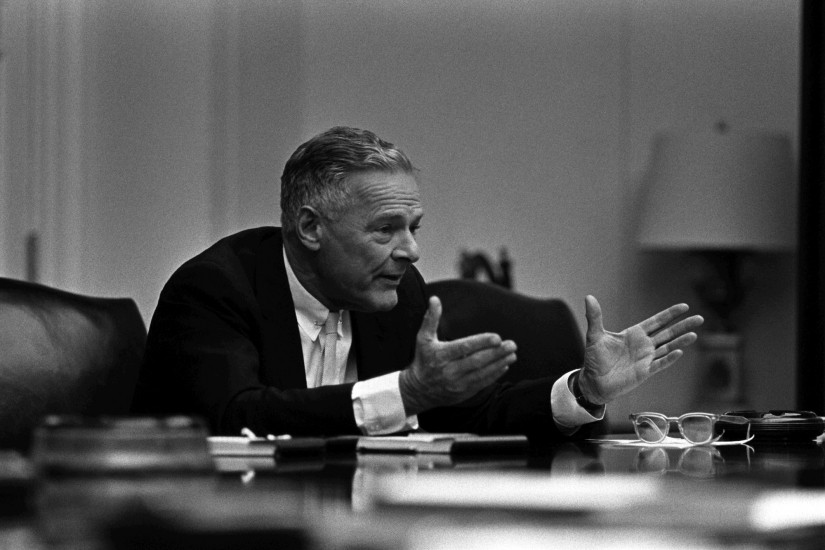 United States Ambassador to South Vietnam, Henry Cabot Lodge Jr., at a meeting in the Cabinet Room with President Lyndon Johnson and others in 1966.
Yoichi Okamoto/Wikimedia
…

The first contest, in March, would be New Hampshire. The Granite State, far closer to Rockefeller’s political base than to Goldwater’s, was of particular importance to the governor. “By late January,” writes Robert Johnson in his 2009 history All the Way with LBJ, “Rockefeller started calling the primary a significant test.”

In reality, however, establishment interests in the northeast were fond of neither candidate. Rockefeller, though a rich east-coast insider himself, had never been a darling of his fellows, and a divorce and new marriage hadn’t helped. Goldwater meanwhile was simply too conservative, with the bothersome and irremediable habit of saying what he thought. At one point, he suggested sawing off the east coast and letting it float out to sea, a quote that eventually featured in an LBJ campaign ad.

And in the early 1960s, the establishment was still the Establishment. In the halls of commerce and government, a search for alternatives commenced. In The Making of the President 1964, journalist Theodore White chronicled the boomlets that accompanied each possibility: Gov. Romney of Michigan? Gov. Scranton of Pennsylvania? President Eisenhower’s brother Milton? None materialized. Dwight Eisenhower himself called Henry Cabot Lodge and asked if he would return from Vietnam to run for president. Lodge declined. As New Hampshire approached, it was looking like the Rockefeller­–Goldwater bout everyone expected.

That was when four friends—“looking for something exciting to do,” as Robert Johnson puts it—opened a Lodge for President office in Boston. They had grown close in 1962 working on the Senate campaign of Lodge’s son George, who lost John Kennedy’s open seat to John’s brother Ted.

Two years later, when the four-person staff of Lodge for President could prove no affiliation with their candidate, the Massachusetts government shut them down. They quickly reopened across the border in Concord. Theodore White, as if advertising for Warner Brothers, called their exploits a “madcap adventure” and “the most lighthearted enterprise of the entire year 1964.”