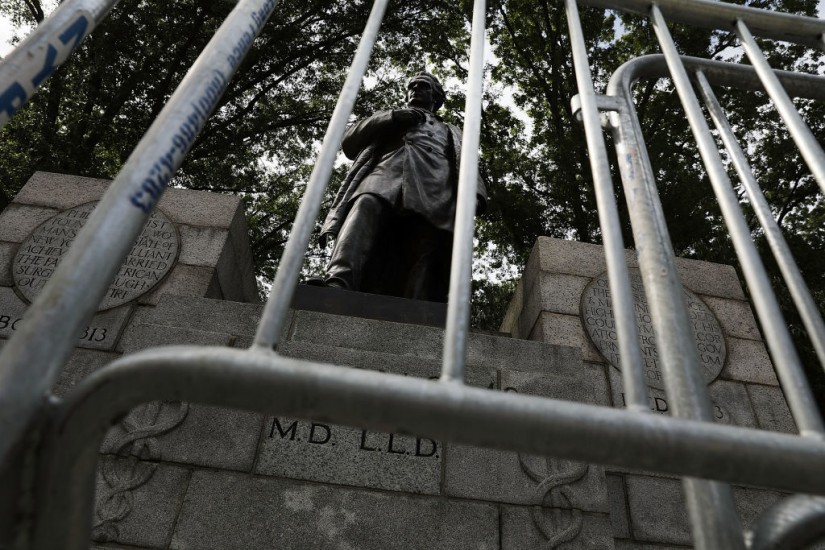 A statue of J. Marion Sims, a surgeon known as the father of modern gynecology, stands along an upper Manhattan street (August 23, 2017 in New York City)
Spencer Platt/Getty Images
…

On Monday, the news arm of Nature, the most powerful publisher in the sciences, weighed in on the Sims controversy with an unsigned editorial entitled, “Removing Statues of Historical Figures Risks Whitewashing History.” In addition to Sims, Nature’s editorial also takes up the case of Thomas Parran Jr., for whom a hall is named at the University of Pittsburgh. Parran served as U.S. surgeon general between 1936 and 1948, during which time he oversaw the Public Health Service’s infamous Tuskegee experiment, which enrolled and followed 600 African American men with syphilis for four decades, without informing them that they were infected and without treating them, so that researchers could watch how that cruel disease eats away at a human body.

Nature warns us that removing Sims’s statue, or Parran’s name from a university hall, would “run the risk of whitewashing history,” and instead asks that these “painful reminders” be supplemented with additional plaques, or “an equally sized monument commemorating the victims.” Nature’s choice of the word “whitewashing” is unfortunate. The impulse behind the statue’s removal isn’t to erase our society’s sins from history in favor of a more sanitized narrative. Quite the opposite. But that is the least of this editorial’s problems.

Nature’s editors don’t say whether there is a substantive case to be made that Sims’s or Parran’s scientific achievements merit these honors in spite of their ghastlier deeds. You can understand why they’d be gun-shy about making that case. For one, the two figures’ sins are not private indiscretions, incidental to their professional reputations. Their treatment of black men and women as subhuman subjects was core to their work. They profited from these experiments, and in the field’s highest currency: scientific prestige. And their actions are not dead history. They are continuous with the racism that infects American society, to the present day. They helped construct a system of medical apartheid, in which black people were allowed to serve as subjects in the experiments that nudged medicine into modernity, but were denied the fruits of those experiments.