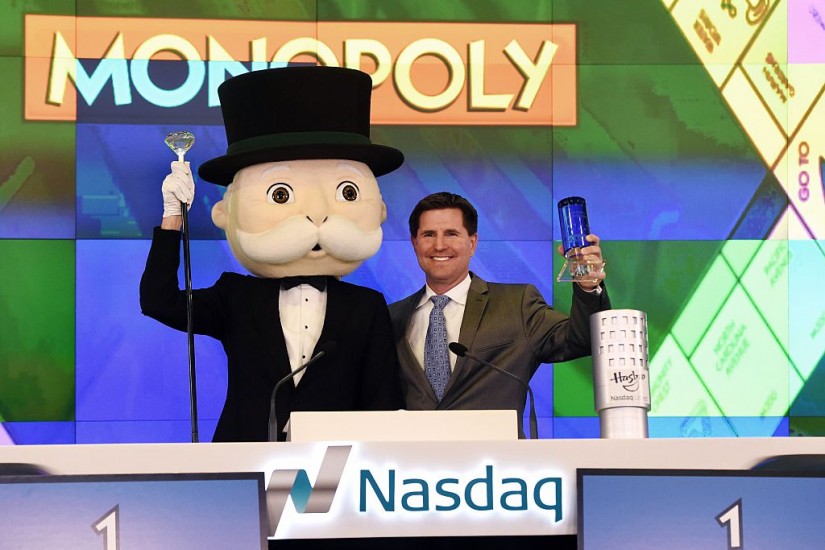 Mr. Monopoly and Hasbro senior VP Eric Nyman celebrate the 80th anniversary of the board game 'Monopoly' at the Nasdaq's closing bell ceremony on March 19, 2015.
Timothy A. Clary/AFP/Getty
…

What drives monopolization is not business know-how or technological innovation, but public policy—a political environment that permits or even enables an investor like Jeff Bezos to engage in a massive accumulation of economic power. Not that long ago in America, no company as large and destructive as Amazon would have been allowed to exist. Preventing and breaking up such corporate behemoths, in fact, was at the very center of the Democratic Party’s agenda. “Private monopolies are indefensible and intolerable,” the party’s platform declared in 1900. “They are the most efficient means yet devised for appropriating the fruits of industry to the benefit of the few at the expense of the many.”

In the late 1970s, however, the Democrats began to abandon the idea that big is bad. Over the past four decades, the party has stood by as giant supermarket chains replaced local grocery stores and Too Big to Fail banks replaced local lenders. As monopolies broke up unions and drove down wages, Democrats increasingly came to rely on campaign contributions from the very corporations that were consolidating their control over the American economy. The Obama administration, like the Bush administration before it, declined to bring a single major monopolization suit against U.S. companies. Even The Washington Post, that exemplar of political opposition to Donald Trump, is now owned by Jeff Bezos. Dissent, brought to you by monopolists.

But with Republicans in control of all three branches of government, and with the big business ethos espoused by Hillary Clinton in tatters, Democrats may finally be returning to their anti-monopoly roots. Leaders within the party are once again looking to the aggressive antitrust movement launched during the Progressive era and extended through the New Deal, which propelled America into three of its greatest decades of rising prosperity and economic equality. The question now is: Can Democrats find a way to rechannel the popular outrage unleashed by Trump, and to repurpose the party’s traditional opposition to monopoly in the age of Amazon?