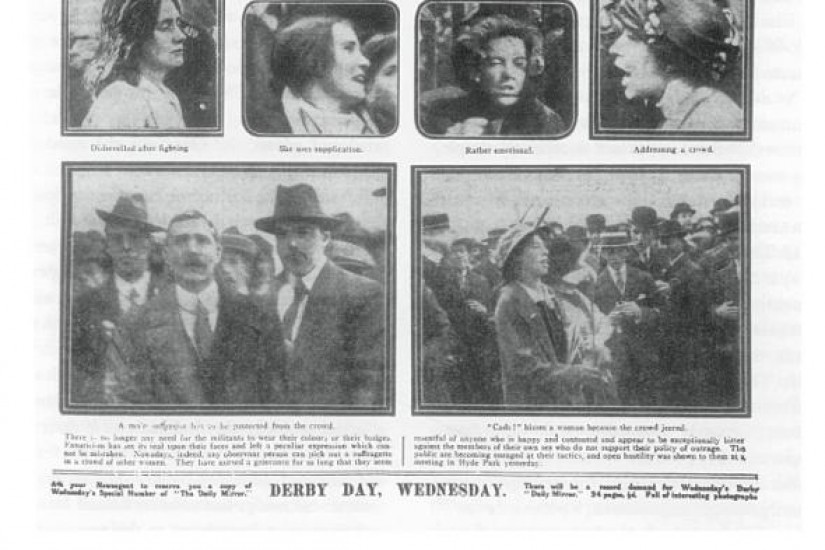 This Daily Mirror feature from May 1914 was supposed to illustrate the severe distortion of womanly features by the unnatural emotions of political activism.
Daily Mirror/Public Domain

The cover of this week’s National Enquirer features a wan, gray Hillary Clinton, looking like she has been drained of all her vital fluids. The photograph, if you can call it that, is a perfect visual artifact of the recent storm of right-wing rumormongering over Clinton’s health, which spilled into the mainstream media this past weekend when Clinton revealed a pneumonia diagnosis that would keep her off the campaign trail for a few days while she underwent treatment.

As more than one observer has pointed out this week, there is sexism at the root of this constant scrutiny of Clinton’s “stamina.” Her opponents amplify any small sign of corporeal weakness in the female candidate, while her overweight, KFC-eating, very lightly exercising opponent of roughly the same age gets a pass. But where does this sexism come from? The long record of American beliefs about women’s bodies and health sheds some light on this week’s overreaction to Clinton’s illness. In the United States, powerful women who make bids for education, status, and position have long been seen as sick: weak, sterile, overweight, ugly, or broken. These ideas may seem antediluvian; this week proves they are still very much alive.

“Many of these conversations about women, work, and education can be traced back to good old Dr. Edward H. Clarke,” historian Jacqueline Antonovich, editor of Nursing Clio, a group blog about gender, medicine, and history, wrote to me. Clarke, a physician who taught at Harvard, published an influential book in 1873: Sex in Education; Or, a Fair Chance for the Girls. He argued that educating women at the college level was “a crime before God and humanity, that physiology protests against, and that experience weeps over.” As historian Sue Zschoche writes, Clarke thought “the female college graduate would be renowned for invalidism rather than erudition, sterility rather than achievement, a degenerate femininity rather than true womanliness.” Because the female body was unable to direct energy toward both reproduction and thought, the educated white female would inevitably betray her own gender—and her race—by failing to have children. (He didn’t think she would be much good at her job, either.)