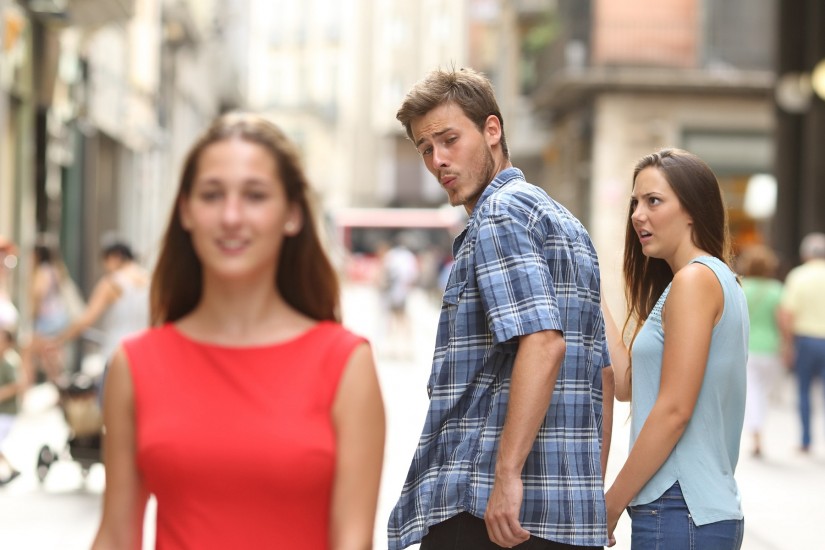 A disloyal boyfriend notices a passing woman in a stock photo that became a popular meme.
Antonio Guillem/Shutterstock

In 2012, Nicole Saylor, head of archives at the Library of Congress’ American Folklife Center, had a revelation while attending an annual meeting of the American Folklore Society. Some of the junior scholars at the conference had abandoned familiar topics like quilt-making and lumberjack songs. Instead, a few were trying to make sense of our digital moment, presenting papers on Slender Man and other memes.

Listening to them talk, Saylor realized that she was witnessing the early days of a new scholarly genre. “I thought, ‘These are among the scholars that we need to serve,’ ” she says. “And there’s a whole new class of documentation that we aren’t getting.”

That revelation ultimately led the Library of Congress to create its Web Cultures Web Archive Collection, a project that formally launched in June. More than a mere repository of memes, the collection includes snapshots of entire sites. Some of them—such as the My Little Pony fan community Equestria Daily—focus narrowly on particular topics. Others—such as Boing Boing, which promotes itself as “a directory of wonderful things”—are long-standing clearinghouses for the broader preoccupations of the internet.

It wasn’t a shocking development. The Library of Congress had been collecting video games for years, and it already had a web archiving project in place. Still, the question was what to include. What counts as folklore? What would be most useful to scholars in the burgeoning field?


To facilitate those decisions, the library turned to a handful of experts, some of them academics. They proposed a variety of sites that would meet the criteria that scholars apply to folklore: the “embodiment or expression of shared values of a particular group, [whether] that group [is] ethnic, religious, occupational, or regional,” according to Elizabeth Peterson, director of the American Folklife Center. Thirty-three sites are currently included in the archive; in a few cases, the library wasn’t able to acquire permission to include a site. (Trevor Blank, a scholar of digital folklore at SUNY Potsdam, told me that he had recommended they incorporate Snopes, but the library hasn’t received a response from the embattled site.) The Internet Archive helped the library crawl and capture the sites.
Like much of what we do in our offline lives, many of the things that hold our attention online meet the folklore standard with ease.
…
View on Slate
View Connections