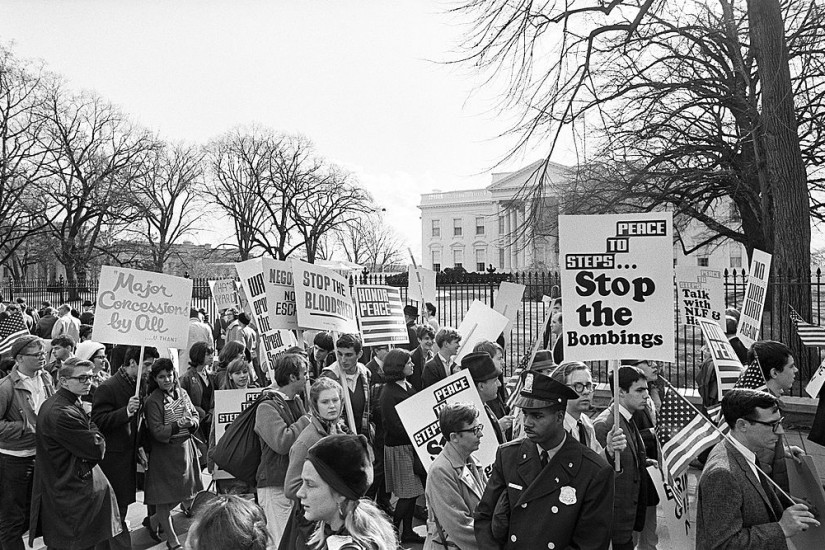 American youths stage a rally in November, 1965 in front of the White House.
AFP/Getty Images
…

Historian Stanley Kutler—who died on April 7, and who is best known for suing to get the Nixon White House tapes released—asked last November in The Capital Times of Madison, Wisconsin: “Will the Pentagon acknowledge the mistakes of American presidents and generals who for seven years steadily increased our commitment to more than 500,000 troops, the largest army raised since World War II? Will it recognize the growing public protests against the war, with increasing criticism in Congress, until eventually it was willing to cut off funding for the war, an unprecedented step which pointedly rejected the validity of the war?” And finally, “What will the Pentagon say to Vietnam veterans who actively criticized, questioned, and opposed the war, then and now?” One more problem: The website’s fact sheet listed the total American deaths, 58,253—but it didn’t mention the number of Vietnamese, Laotians, and Cambodians killed, commonly estimated at 3 million to 4 million.

The Pentagon’s change of plans is “good,” Hayden told me. “The threat of a false narrative will always be there, but we don’t need to fight an overpowering antagonist on the battlefield of memory if we can help it. If they focus on honoring vets, that would allow us to preserve and develop the legacy of the peace movement and the lessons for today.”