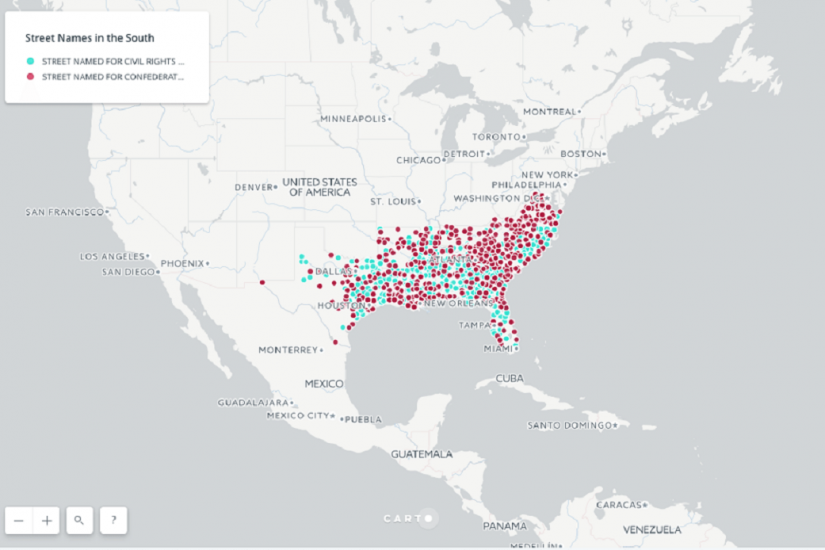 In America, public memory is skewed in favor of “those who were allowed to hold power,” Rebecca Solnit writes in the New Yorker. The country’s landscape is dotted with tributes to dead white men—many of whom fought to subjugate those with skins darker than theirs.

The Southern Poverty Law Center estimates 1,500 monuments, public buildings, and military bases around the country invoke the Confederacy—largely erected during spurts of racial progress and thus, in direct opposition to it. Meanwhile, the spaces where enslaved people and their descendants were tortured and killed largely go unmarked. And public monuments to their resilience and struggle for justice are too few and far between—particularly in the South.

But it’s not just structures that skew in favor of Confederate history in the South.

Two new maps created by Caroline Klibanoff, a digital public historian at Northeastern University, document street names. In the first, she tallies the number of streets named after Confederate leaders alongside those celebrating prominent figures from the civil rights era.

In the U.S. overall, the latter outnumber the former—but that flips in the South (first map below). While this map doesn’t necessarily offer a comprehensive count, it allows for a comparison of how the two historical occurences are regarded, remembered, and enshrined, Klibanoff writes:

Given the social capital invested in names of public spaces, the below examination of Southern street names and narratives provides a window into the larger story the region tells about itself.