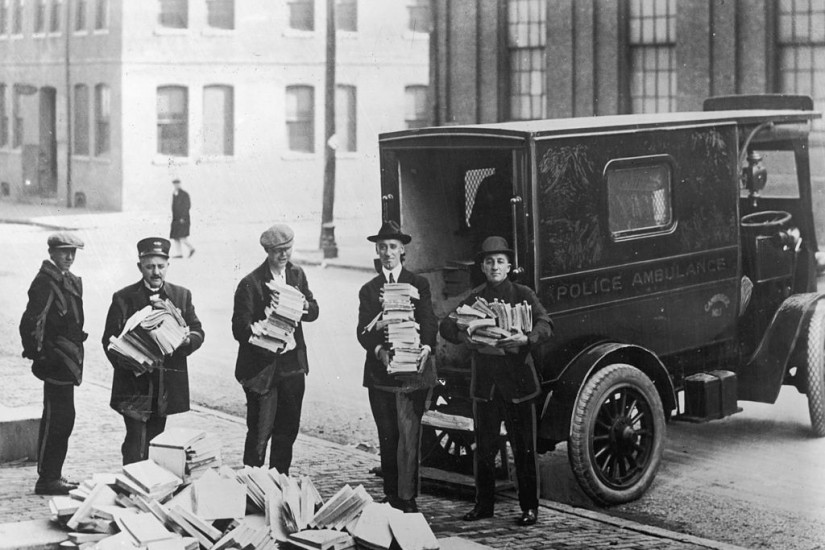 As our newspapers and TV screens overflow with choleric attacks by President Trump on the media, immigrants, and anyone who criticizes him, it makes us wonder: What would it be like if nothing restrained him from his obvious wish to silence, deport, or jail such enemies? For a chilling answer, we need only roll back the clock one hundred years, to the moment when the United States entered not just a world war, but a three-year period of unparalleled censorship, mass imprisonment, and anti-immigrant terror.

When Woodrow Wilson went before Congress on April 2, 1917, and asked it to declare war against Germany, the country, as it is today, was riven by discord. Even though millions of people from the perennially bellicose Theodore Roosevelt on down were eager for war, President Wilson was not sure he could count on the loyalty of some nine million German-Americans, or of the 4.5 million Irish-Americans who might be reluctant to fight as allies of Britain. Also, hundreds of officials elected to state and local office belonged to the Socialist Party, which strongly opposed American participation in this or any other war. And tens of thousands of Americans were “Wobblies,” members of the militant Industrial Workers of the World (IWW), and the only battle they wanted to fight was that of labor against capital.

The moment the United States entered the war in Europe, a second, less noticed war began at home. Staffed by federal agents, local police, and civilian vigilantes, it had three main targets: anyone who might be a German sympathizer, left-wing newspapers and magazines, and labor activists. The war against the last two groups would continue for a year and a half after World War I ended.

In a strikingly Trumpian fashion, President Wilson himself helped sow suspicion of anything German. He had run for reelection in 1916 on the slogan “he kept us out of war,” but he also knew American public opinion was strongly anti-German. Even before the declaration of war, he had darkly warned that “there are citizens of the United States, I blush to admit, born under other flags…who have poured the poison of disloyalty into the very arteries of our national life…. Such creatures of passion, disloyalty, and anarchy must be crushed out.”