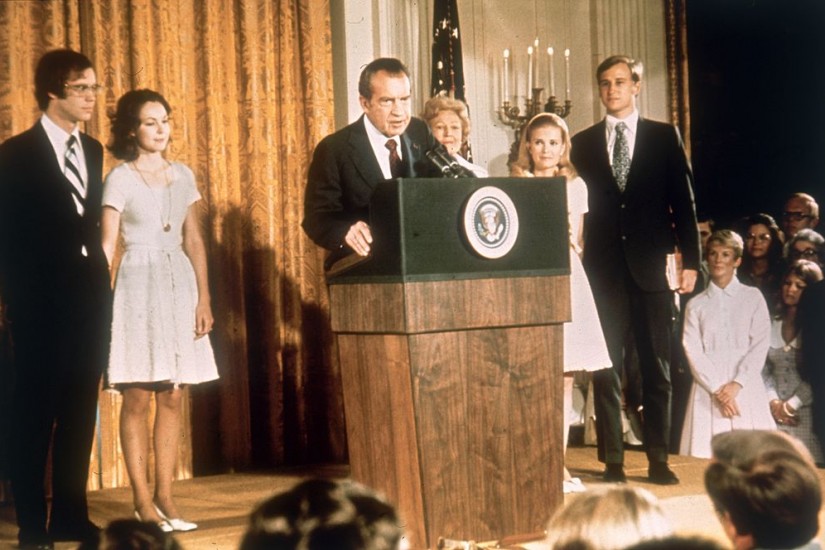 Nixon at the White House with his family after his resignation as President, 9th August 1974.
Keystone/Hulton Archive/Getty Images

The American colonies imported the idea of impeachment from England, where Edmund Burke called it the “great guardian of the purity of the Constitution.” But from 1750 to 1775 republican fervor was running rampant, and the colonists made the idea all their own. Long before shots were fired in Lexington and Concord on April 19, 1775, colonial assemblies used impeachment as a homegrown weapon of republican government, rebuking the King’s agents for the abuse or misuse of power.

After the nation won its independence, a number of state constitutions proudly included the right of impeachment. And when the Constitutional Convention accepted the idea of a powerful President, in the summer of 1787, its delegates insisted on the impeachment mechanism. Impeachment lay at the core of their intricate effort to balance the republican commitments to liberty, equality, and self-rule with a strong, energetic executive branch.

There is a good argument that, without the impeachment mechanism, the Constitution would never have been ratified. Too many Americans would have rejected the proposed document as a betrayal of the grounds on which the Revolution had been fought.

At the Convention itself, there was little elaboration of the meaning of the grounds provided for removing the President: “Treason, Bribery, or other high Crimes and Misdemeanors.” But the Convention’s brief debates, and the national discussion during ratification, strongly support Alexander Hamilton’s insistence that what is required is “the abuse or violation of some public trust.” He argued that high crimes and misdemeanors “are of a nature which may with peculiar propriety be denominated POLITICAL, as they relate chiefly to injuries done immediately to society itself.”