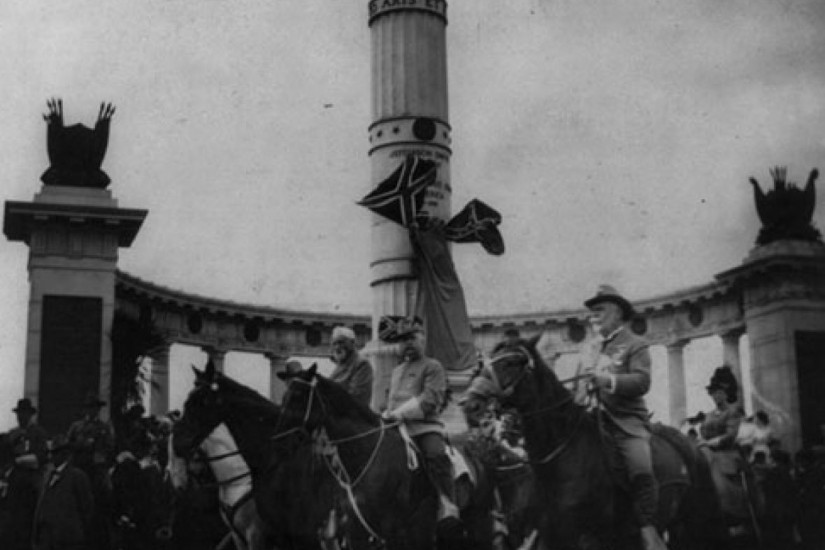 ... could be widely disseminated. The Lost Cause was an interpretation of history that argued that the Civil War was not fought over slavery but over states’ rights; that slaves had been happy and loyal; and that all the men who fought for the South were men of honor, none more so than Robert E. Lee.

... could be widely disseminated. The Lost Cause was an interpretation of history that argued that the Civil War was not fought over slavery but over states’ rights; that slaves had been happy and loyal; and that all the men who fought for the South were men of honor, none more so than Robert E. Lee.

We can see the rise of Lost Cause orthodoxy, and the return of Confederate symbols, in events like the 1890 unveiling of the Lee Monument in Richmond, Virginia, the former capital of the Confederacy. Now that the political power of those who supported Reconstruction had been rolled back, the white elite in the city planned a three-day event to coincide with the unveiling of the monument and planned the largest reunion of Confederate veterans to date. It featured dinners, banquets, parades, speeches, published biographies, and fireworks. According to newspaper accounts, there were more than 140,000 spectators. The parade was so long it took two hours to pass; it was headed by former Confederate generals on horseback and 20,000 uniformed former Confederate soldiers. The Richmond Times proudly declared: “Richmond Reoccupied by Men Who Wore the Gray.”

Confederate flags, Confederate veterans, Confederate uniforms, and Confederate marching songs were everywhere. Such a bold and lavish display of the symbols of the Confederate States was noticed outside the South. Kansas Sen. John J. Ingalls, speaking at Gettysburg only a few days later, worried about the return of the “rebel colors.” Well aware of the extensive publications dedicated to promoting “Lost Cause” ideology and particularly disturbed by the attempt to rewrite the history of the Civil War in an effort to omit slavery, he reminded his listeners that slavery was the key to understanding the conflict. “Millions of human beings were held in slavery, cruel, monstrous, inconceivable in its conditions of humiliation, dishonor and degradation; … Eleven states seceded, or attempted to secede from the Union, to make this system of slavery, the corner-stone of another social and political fabric, and carnage reigned on a thousand battle fields.” National newspapers were also stunned by the respect shown the “flag of treason,” and when Southerners “put up that ensign of treason—the stars and bars—and make it a god to display, and to worship, we, as an American citizen, offer our solemn protest.”

Black Richmonders understood what the return of Confederate imagery meant. The local black newspaper, the Richmond Planet, published a column titled “What it means.” It reported of the festivities: “No flags of the Union ornamented the procession. Only the stars and bars could be seen, the ‘rebel yell,’ under the flag of secession which waved proudly after twenty-five years rent the air.” The editor predicted that this resurgence of Confederate ideology would only result in “a legacy of treason and blood,” and noted that “It serves to reopen the wound of war and cause to drift apart the two sections … [it] forges heavier chains with which to be bound.”

Blacks who had lived through slavery were all too familiar with the violence that held up the institution of slavery. Former slaves who recalled the regular militia patrols that were part of the machinery of slave owner control would have thought these extensive military parades a familiar site. ...