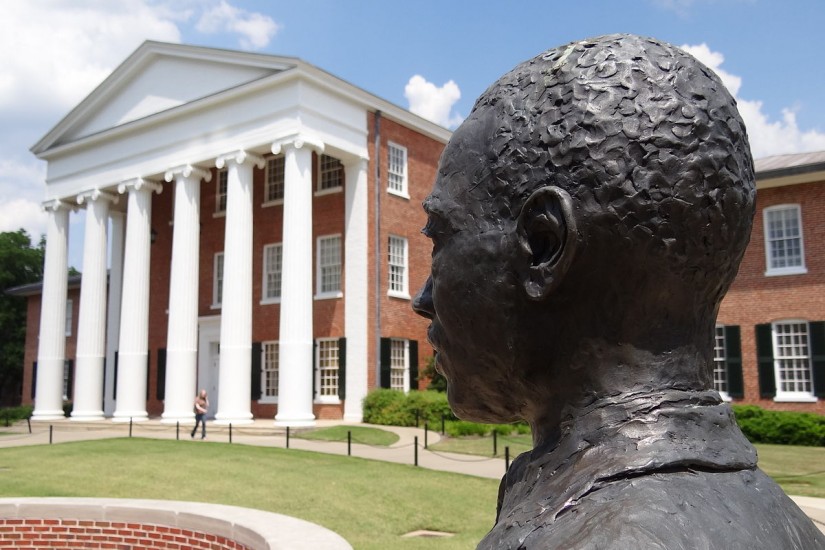 Historic truth can hurt. Ole Miss was founded in 1844 on land that originally belonged to indigenous peoples, and many of its buildings were constructed, according to the report, by “black workers, many of them slaves.” During the Civil War, virtually the entire student body, 135 out of 139 students, enlisted in the Confederate army. A monument honoring their sacrifices, erected in 1907, was part of the Lost Cause movement that saw the proliferation of such statues across the South that have been at the center of recent turmoil—most notably the fatal riots in Charlottesville last month. The Ole Miss memorial bears the inscription “They Gave Their Lives In A Just and Holy Cause.” Then there’s Longstreet Hall, which was dedicated in 1929 and is named after the university’s second president, a slave-owning uncle of a Confederate General. There’s also the Johnson Commons, which honors the family name of Paul B. Johnson, a former governor whose son, also a former governor, is infamous for his “active opposition” to desegregation. In September 1962, Paul Johnson Jr., then the lieutenant governor, physically blocked federal marshals who were protecting James Meredith, the first African American whose admission to Ole Miss was a landmark moment in the American civil-rights movement.

Perhaps the most egregious symbol of Ole Miss’s racist roots is the campus building that honors the former U.S. Senator and Mississippi governor James K. Vardaman, who advocated for lynching and publicly chastised President Theodore “Teddy” Roosevelt for inviting the African American educator and author Booker T. Washington to a dinner at the White House in October 1901. “Let Teddy take coons to the White House,” Vardaman wrote at the time in the Greenville Commonwealth, a newspaper he owned. “I should not care if the walls of the ancient edifice should be so saturated with the effluvia from their rancid carcasses that a ‘Cench bug’ would have to crawl upon the dome ... to avoid asphyxiation.”

The Chancellor’s Advisory Committee on History and Context was unsparing in exposing the university’s darkest moments. Its findings include a faculty meeting report, from November 1860, in which a student “burned the negro’s cheek with a cigar,” and another, dated March 1860, in which another student sexually assaulted a black woman named Jane, “who lived and worked as a domestic slave in the Chancellor’s private residence.”