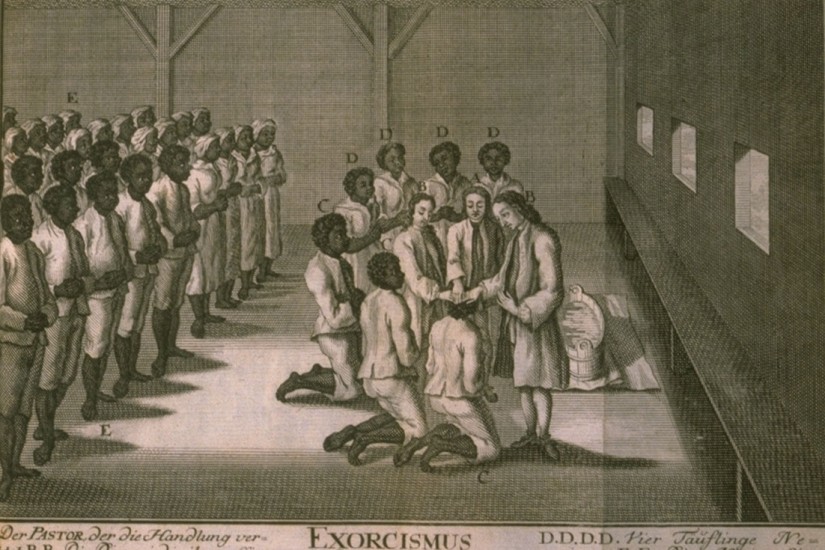 "Exorcism of the Baptismal Candidate among the Negroes" by David Cranz in a German text related to the Moravian Church (1757).
David Cranz/Brown University
…

Most scholars have examined the history of slave conversion in colonial America and seen missionary failure. People of African descent did not join Protestant churches until the late eighteenth century, they write, because Protestants did not successfully appeal to enslaved and free blacks. This is part of the story, yet the language of “not joining” implies free choice. In practice, the majority of enslaved and free blacks were forbidden from joining Protestant churches. Before 1750, historical records tell the same story again and again. Missionaries, desperate to gain slave owner approval, tried to convince slave owners that conversion to Christianity would make enslaved people more obedient. Slave owners, convinced that baptism would make enslaved and free blacks “rebel and cut our throats,” as the governor of Barbados put it in 1675, refused to listen. Thousands of enslaved and free blacks, meanwhile, intrigued by the theological content and the political power of Christian baptism, fought their way into churches.

Why was black conversion so controversial? Or to put it differently, why did the baptism of enslaved and free black men and women engender such violence in an empire ostensibly founded on spreading Protestantism? This is the question I address in my book, Christian Slavery: Conversion and Race in the Protestant Atlantic World (UPenn, 2018). Using English, German, and Dutch Creole missionary records, along with law books and governmental records, I examine the political, social, and theological debates surrounding slave conversion in the Protestant Atlantic world. At the same time, I ask why people of African descent chose to convert to Protestantism, and how their conversion forced Europeans to reinterpret key points of Scripture and the meaning of “true” conversion. The debates about slave conversion, I argue, transformed the practice of Protestantism, the meaning of conversion, and the language of race in the early modern Atlantic world.

Mathew’s experience was a consequence of what I call “Protestant Supremacy”: the white suppression of black conversion to Christianity. It was the dominant ideology of oppression in the Protestant slave colonies in the seventeenth and early eighteenth centuries. White slave owners used religious difference to justify enslavement and they policed the line between slave and free by restricting access to baptism. In places like Barbados, South Carolina, and St. Thomas, the vast majority of Protestant slave owners denied enslaved people access to Protestant baptism.