In the text of the U.S. Constitution, the United States Congress precedes both the executive and judicial branches; its powers and procedures are enumerated in Article I. Many framers of the constitutional sought to limit the power of the executive with a strong legislature. However, since the New Deal in the 1930s, the growth of the executive branch,the development of a national media market, and the growing visibility of the presidency have made the office of the president and individual presidents loom far larger than Congress as a body and than any individual legislator.

The idea of a weak Congress and a strong President confuses our understanding of the legislative process and the operations of the federal government. For scholars and commentators alike, the sheer number of members of Congress and the often arcane procedures of Congressional politicking have led to an even greater emphasis on the presidency. These tendencies create even greater blind spots when it comes to understanding the House and the Senate.

This project aims to recapture the role of Congress as an equal branch in governing, worthy of studying side-by-side with the Presidency, by offering comprehensive and fine-grained data on the history of Congressional elections. To understand the most momentous periods of reform in American political history, we must give attention to all branches of government. Indeed, landslide presidential wins have often failed to produce a raft of policy victories -- as in 2009-10. Public approval and the president’s political capital can very often peter out -- as in 1967-68 or 1987-88, and we understand why by considering Congress at the same time. Only when Congressional majorities match the Presidency do we see sweeping legislative reforms -- as in the New Deal 1933-34 and the Great Society agenda in 1965-66. Even then, there is no guarantee of dramatic political change, as in 1921-22. The internal dynamics of Congress, such as the committee systems, the legislative rules of each chamber, and the ideologies and personalities of individual lawmakers, also factor into political and legislative change.

The Congress, and especially the House of Representatives, has often been portrayed as the more representative branch of government. It more directly and frequently reflects the changing demographics and changing will of American voters through its biennial elections. The fine-grained geography of Congressional districts, especially in the House, also allows us to see the waxing and waning of democratic ideals within the long arc of expanding voting rights over time by emphasizing the building block of representative democracy -- elections.

With these visualizations and the data resources we provide, users can track their own district’s history, can explore regional and national patterns, or can download the raw data, including roll call votes, for their own research. See the transformation of party systems and their ideologies, track the career of individual legislators, and watch the expansion of Congress with the American nation.

A Note on Congressional Elections

All members of the House of Representatives -- now 435 voting members -- are elected every two years. The 100 members of the Senate are divided into three classes, and each class is elected on six-year cycles. Thus, every two years one-third of the Senate faces election. The House has always been popularly elected. Only since 1914, with the ratification of the 17th Amendment, has the Senate been popularly elected. Before that, Senators were largely chosen by state legislatures.

A Note on Congressional Reapportionment, Redistricting, and Gerrymandering

Redistricting and gerrymandering are as old as Congress itself.

Since the ratification of the U.S. Constitution, Congress has set the number of federal legislators and the number of representatives per state by legislative act. Each state determines whether its members of Congress are elected at-large or by geographic district. Currently, all Congressional representatives represent individual geographic districts, but this was not always the case.

Apportionment is the process of allocating House seats to match the changing U.S. population. Redistricting is the state-by-state process of deciding how to divide up the population for geographic districts. Gerrymandering is the term for a heavily partisan division of districts to favor one party or another.

The House of Representatives grew along with the United States population until reaching 433 members from 46 states at the beginning of the twentieth century. The Reapportionment Act of 1911 set the current number of Representatives, 435, upon the recognition of Arizona and New Mexico as states. The number of seats briefly rose to 437 in the early 1960s when Hawai’i and Alaska entered the union. Upon reapportionment after tabulation of the 1960 Census, the number returned to 435 where it has remained since. The District of Columbia and several territories also have non-voting Representatives.

The Reapportionment Act of 1929 permanently linked the census and reapportionment and made the process automatic. Prior to that, Congress passed reapportionment acts after each Census through 1911. However, it failed to pass a reapportionment act until the end of the 1920s and the legislation would not take effect until after the 1930 Census. Each state still determines for itself the nature of representation, whether it be at-large, geographic districts, or some combination.

Electing the House of Representatives 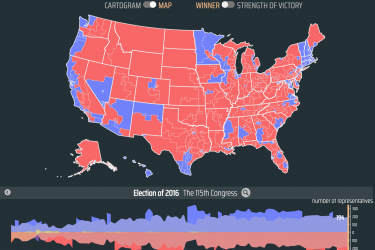 Electing the House of Representatives

A series of interactive maps showing the results of nearly two centuries of congressional elections.
by Robert K. Nelson, LaDale Winling via American Panorama on October 15, 2018