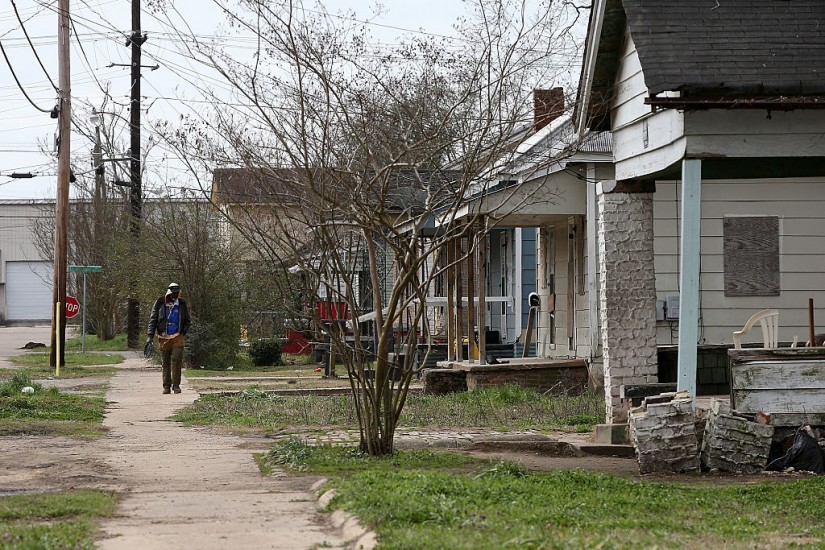 A pedestrian walks through a neighborhood with run down homes in Selma, Alabama (2015)
Justin Sullivan/Getty Images

Whichever way you look at it, the wealth inequality gap between black and white Americans is staggering. It’s far worse than income inequality, and one of the reasons why racial inequality hasn’t improved in the US over the past 50 years, and in some ways has gotten even worse. In the US, the average black family has just one-tenth of the wealth of the average white household.

Black Americans living near the poverty line have, on average, zero net wealth—that is, their debts and other liabilities are about equal to their assets. White Americans near poverty, by contrast, have on average $18,000 of wealth, a much more considerable safety net. At the other end of the spectrum, blacks make up less than 2% of America’s wealthiest 1%. The average black family in the top 1% is worth about $1.6 million, but white families in the top 1% are worth on average $12 million. In the US, fewer than 2% of black households are millionaires or better, compared with 15% of white households.

These figures come from a new study published this week (pdf) by William Darity Jr. of Duke University, Darrick Hamilton of The New School, and others, which uses vast amounts of wealth data to dismantle some long-held beliefs about the best ways to address inequality. Conventional ideas include promoting greater educational attainment, hard work, better financial decisions, and “other changes in habits and practices on the part of blacks.”

“There are no actions that black Americans can take unilaterally that will have much of an effect on reducing the racial wealth gap,” the researchers conclude. Instead, concerted financial intervention by the government is needed.

While higher levels of educational attainment can improve an individual’s income to some extent, the evidence suggests that even college can’t improve inequality. In the US, a college-educated black person has less wealth than a white person with less than a high school education.

One of the other “myths” the study seeks to debunk is that boosting homeownership rates among black Americans will improve wealth inequality. Federal Reserve data from the past two decades show a consistently large gap in homeownership rates by race.

However, closing this gap doesn’t address wealth inequality because it fails to acknowledge the racial gap in home values as well. In 2016, the median value of the primary residence of a white household was $200,000, versus $124,000 for the typical black household.

This disparity in housing values can be traced back to the US’s history of blatantly racist housing policies such as redlining, discrimination in federal home loan subsidy programs, and things like contract buying schemes. (This short video explains it all.) Fifty years after the Fair Housing Act, residential segregation still persists.

“Inequality is preserved by policy and often created by policy; I would contend it’s a major source of racial inequality in the United States,” said Thomas Shapiro, the author of Toxic Inequality, in a speech at the London School of Economics this year. Shapiro’s research for the Institute ...