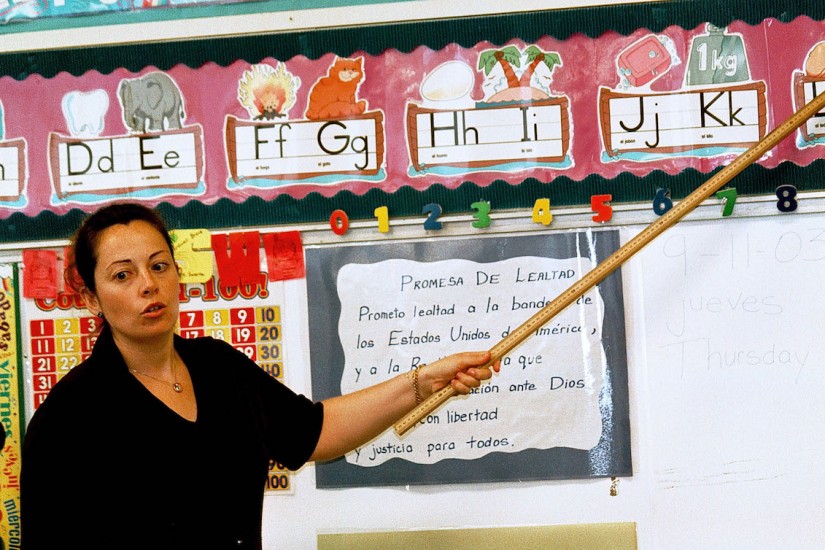 Spanish speaking first grade teacher, instructs a class on the Spanish pronunciations of the alphabet at a school in Tyler, Texas (2003).
Mario Villafuerte/Getty Images

If today’s teenage jingoists scream “TRUMP! TRUMP! TRUMP!” to heckle Latinos at high school sporting events, public schools 50 years ago suggested a more promising future: one in which conservatives worked alongside liberals to secure educational access for native-born and immigrant Latino children whose dignity was assumed.

This lost past serves as a useful reminder that today’s polarization is not preordained, and that pursuing policies that persecute Latinos is hardly a conservative article of faith. On the contrary, until Spanish bilingual-bicultural education advocacy became intimately intertwined with the progressive political movements of the late 1960s and 1970s, conservatives often actively supported measures intended to solve the oft-cited problem that more than 50 percent of Spanish-speaking children dropped out of school by the eighth grade.

During the 1960s, conservative policymakers wrestled earnestly with “the Mexican-American problem,” as the low rate of educational attainment among Latinos was often described. As governor in 1967, Ronald Reagan abolished a nearly century-old statute requiring English instruction in California schools, earning criticism that “with one stroke of his pen” he had created “the Mexican-American” who resisted assimilation.

And then there was the arch-conservative Max Rafferty. If that name rings a bell in 2017, it’s likely thanks to his syndicated columns and books that floridly described his battle to “kill progressive education” as California state superintendent, steering schools through what he styled the moral wasteland of “the Sick Sixties.”

Yet in the mid-1960s, Rafferty established professional development conferences on the “Education of the Mexican-American,” even meeting with the Mexican Minister of Education to contemplate teacher and textbook exchanges. Sounding a more inclusive note than many of his contemporaries, Rafferty spurned “total assimilation” and proclaimed that “bilingualism is important for everyone — not only for the Mexican-American student who must learn English along with his Spanish, but also for his Anglo counterpart who should learn Spanish.”

Rafferty went further: He hired the highest-ranking Mexican American in the California state bureaucracy at the time, Deputy Superintendent Eugene Gonzales. Gonzales was on the front lines of developing and implementing bilingual-bicultural educational policies primarily directed at Mexican Americans. He partnered with moderate Republicans, such as Leon Panetta (who later became a prominent Democrat) and Senator Thomas Kuchel, who were similarly passionate about enforcing civil rights protections for African Americans and Latinos.

Innovative as bilingual-bicultural education programs were in this era, many of these programs were also deeply assimilationist. As one program mission announced, Spanish would only be used to “effect a natural and effective fusion with the school and the American heritage it perpetuates.” The most widespread English as a Second Language (ESL) approach involved no effort to maintain the native language or culture. Radically progressive programs that taught Spanish and celebrated Mexican-American culture rarely gained sustained support from liberals or conservatives.

Yet bipartisan support for even this basic appreciation of the value of the Spanish language and Latino culture to school and society was fleeting.

What happened? In short, 1968. On the first business day of the year, President Lyndon Johnson signed the federal Bilingual Education Act into law. The first federal recognition of linguistic minorities, it was a watershed for Latino advocates who had been laboring at the district, city and state ...