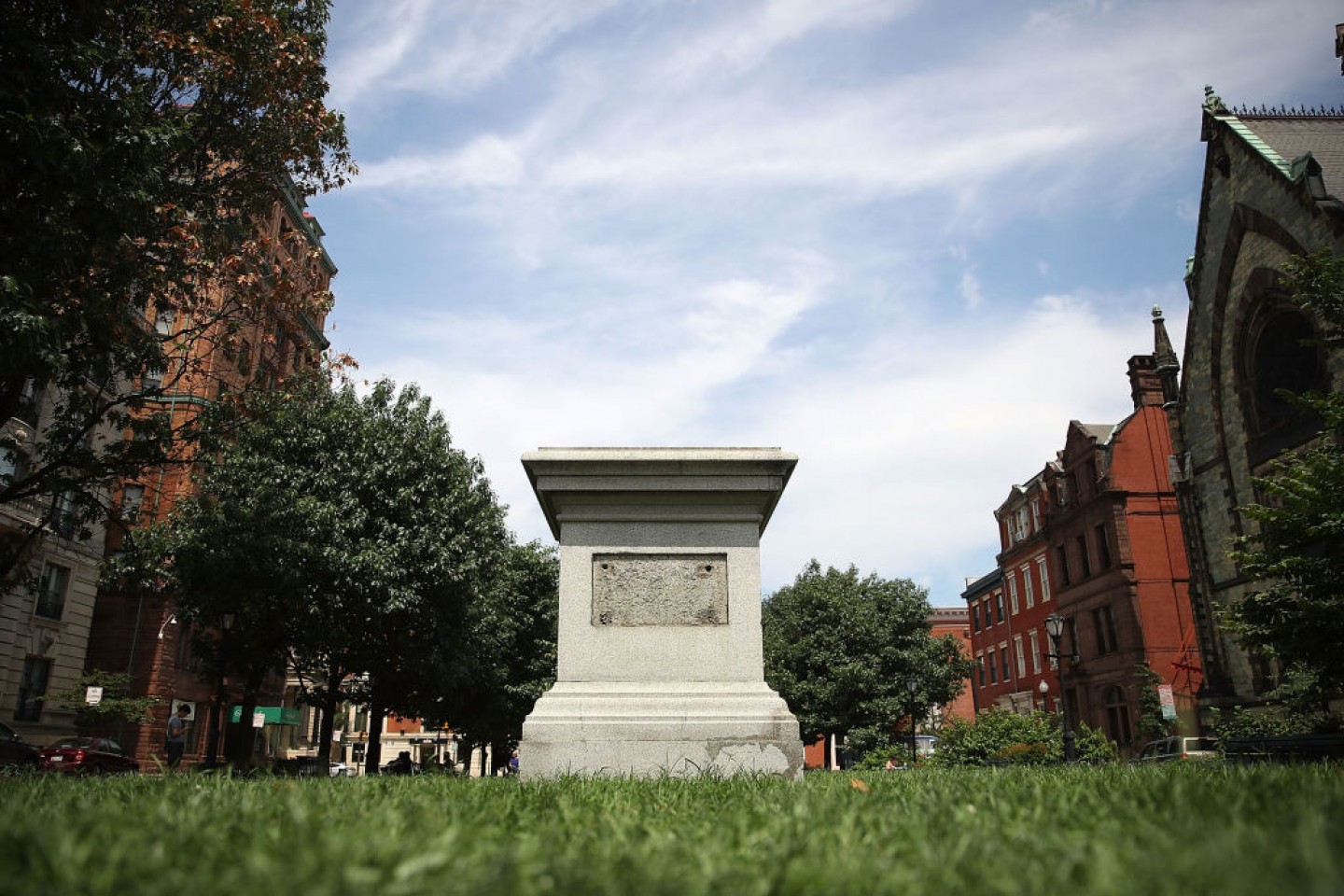 Empty pedestal that used to support a statue of Roger B. Taney, majority author of the Dred Scott decision. On Aug 16, the City of Baltimore removed it, following the weekend's violence in Charlottesville, Virginia.
Mark Wilson/Getty Images

The violence committed by white nationalists in defense of the Robert E. Lee monument in Charlottesville, Virginia this month catapulted the debate over the public display of Confederate iconography into the national spotlight. The murder of Heather Heyer will likely have the same impact on the removal of Confederate monuments as the murder of nine churchgoers in Charleston, South Carolina by Dylann Roof did in 2015 on the battle flag. As was the case in the aftermath of the Roof murders, the ensuing discussion about the fate of Confederate monuments has been emotional and divisive. Much of it has fallen along political lines, and all too often reflects a fundamental misunderstanding of the Civil War, as well as of the period in which the vast majority of these monuments were erected. What is different this time around, however, is the growing visibility of professional historians in the discussion.

This is an encouraging development. Professional historians are accustomed to being overshadowed by individuals with little or no training in the field. Bill O’Reilly’s books, including his The Killing History series, regularly top bestseller lists. Cable news outlets often host panel discussions about historical topics that are better suited to a gladiator pit. But almost immediately after the Charlottesville rally, I noticed an uptick in appearances by professional historians on local and national TV and radio programs. Major newspapers and magazines featured writing by Karen Cox, Nina Silber, David Blight, W. Fitzhugh Brundage, Jane Dailey, Eric Foner, Annette Gordon-Reed, Manisha Sinha, and Chad Williams, among many others.

The contributions of these leading historians would be welcome regardless of the topic at hand, but the subject of Confederate monuments calls especially for the careful reflection and analysis of historians to help the public untangle the complex web of history and memory. Confederate monuments raise important and difficult questions about the history of the Civil War and its aftermath, but they also open up a window into the Jim Crow-era, which produced the majority of the Confederate monuments around us. This period, which witnessed the gradual erosion of civil rights of African Americans and lynching as a form of extra-legal enforcement, is often brushed aside by a nation that embraces a historical arc around the theme of “American Exceptionalism.” It is in connecting these monuments to a particular time and place that scholars have made their most important mark.

What historians have added to the national discussion is that there is a crucial difference between history and historical memory. This is a distinction that the President and Vice President of the United States and others have failed to acknowledge in their repeated claims that the removal of monuments constitutes nothing less than an act of “erasing history.”

The dedication of monuments and memorials in places like Charlottesville, Richmond, New Orleans and elsewhere between roughly 1890 and 1930 are a window into how white southerners chose to remember the conflict long after the guns fell silent, and how they used the memory of Confederate leaders to impart moral lessons on future generations at a time of racial unrest. Historians have demonstrated how these monuments helped establish and maintain a system of Jim Crow segregation—by defining and enforcing cities’ racial boundaries through much of the 20th century. A monument to Robert E. Lee or Jefferson Davis ultimately tells us much more about the people and society that chose to commemorate these men than the historical figures and events themselves.

That said, historians do not enjoy any particular authority when it comes to the question of whether specific monuments should be removed or relocated. These are questions that ultimately must be decided by individual communities. What historians have shown, however, is that debates over Confederate iconography are not new. They reflect an evolving national memory of the Civil War that in the last few decades has rejected a sanitized Lost Cause interpretation that denies slavery's central place in the Confederate cause. Today's debate has its roots in the fact that in many of these communities, legalized segregation prevented African Americans and others from helping to shape how public spaces would be used to remember and commemorate the Civil War, and whose stories would be told and forgotten.

There is no telling how many more monuments will be impacted by what is likely only the beginning of a bitterly divisive national debate. But understanding that it is a debate about memory may help us to see that the primary issue is not whether history will be erased, but rather whether Americans can, in 2017, bridge racial and ethnic differences to find common ground in the past.