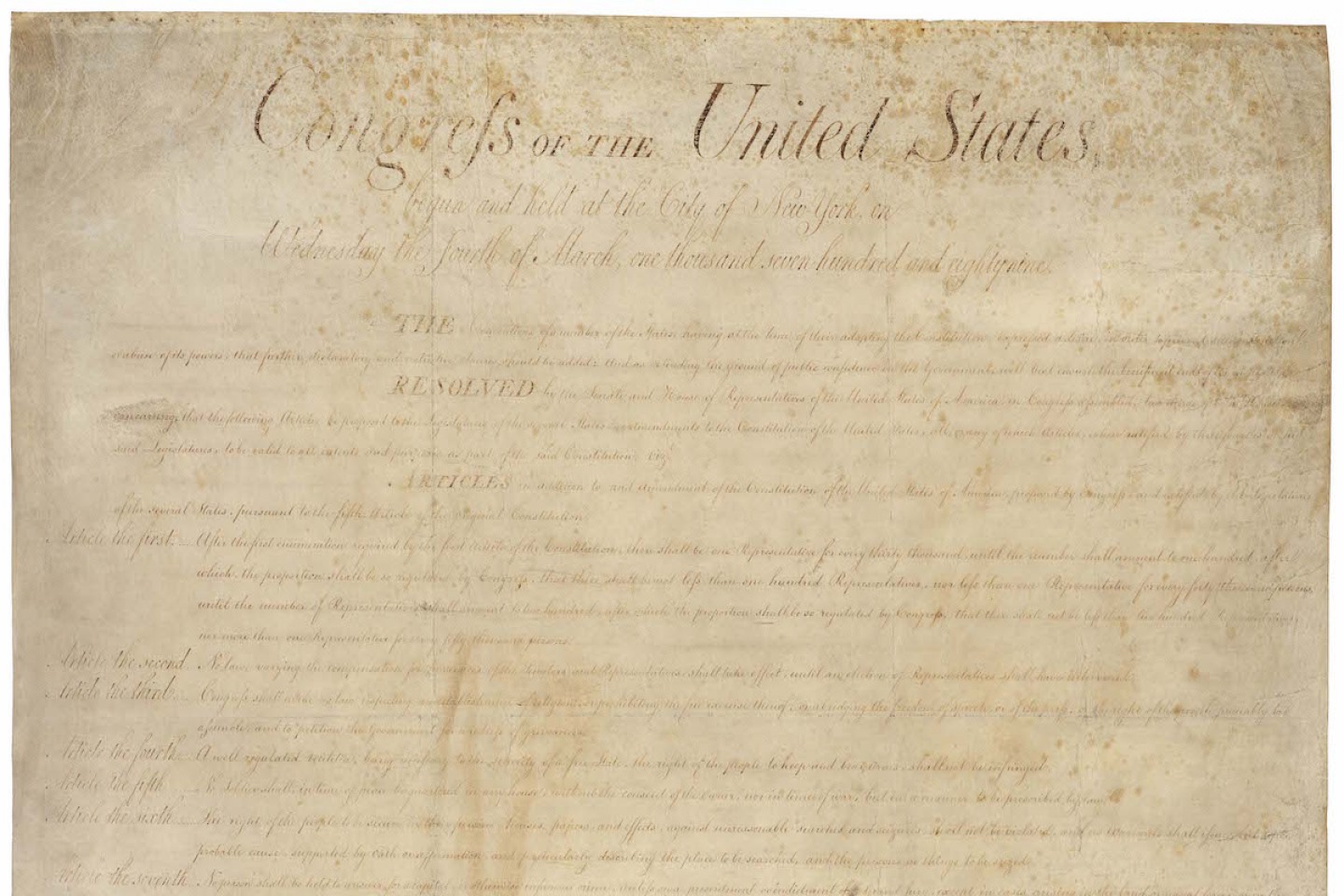 The Bill of Rights. Twelve articles were proposed in 1789, ten of which became part of the U.S. Constitution in 1791.
National Archives

Can schoolchildren be punished if they refuse to say the Pledge of Allegiance? The Supreme Court was asked to answer this question in 1943, and almost unanimously, concluded that the answer is no. Writing for the Court, Justice Robert Jackson explained that the Bill of Rights protects “the individual’s right to speak his own mind,” and that includes the right to decide not to speak. Moreover, no legislative body—whether Congress or the local school board—had the power to override “the individual’s right.” To the contrary, Jackson wrote, in an oft-quoted passage: “The very purpose of a Bill of Rights was to withdraw certain subjects from the vicissitudes of political controversy … One’s right to life, liberty, and property, to free speech, a free press, freedom of worship and assembly, and other fundamental rights may not be submitted to vote; they depend on the outcome of no elections.”

Jackson gave eloquent expression to a widespread sentiment in American culture: a fervent faith in the Bill of Rights—the Constitution’s first ten amendments—as our country’s most meaningful and effective limits on government power. Within these ten amendments, the thinking goes, can be found all of the essential safeguards against the tyranny of popular majorities. Jackson’s contemporary on the Court, Justice Hugo Black, referred to the Bill of Rights as “the heart of the Constitution.” President Truman venerated the first ten amendments as the Constitution’s “most important part,” guaranteeing “the right of the individual to go where he pleases, to do what he pleases, to say what he pleases.” It was these rights, Truman explained, that most clearly distinguished the United States from totalitarian states, where “the individual” has no choice but “to do what they tell him.”

Eighteenth-century Americans generally understood a bill (or declaration) of rights to constitute the prefatory sections of a constitution. In addition to their enumeration of specific protections, these bills also typically laid out broad, abstract principles. The paradigmatic example was the Virginia Declaration of Rights of 1776, which began by asserting that “all men are by nature equally free and independent” and endorsing the people’s “right to reform, alter, or abolish” governments deemed “inadequate” to the common good. Only then did the Virginia Declaration set about listing more specific guarantees, such as the right to a “speedy trial” and the protection against “cruel and unusual punishments.”

When the Anti-Federalists complained that the Constitution of 1789 lacked a bill of rights, then, they meant that it lacked a prefatory text along the lines of the Virginia Declaration of Rights. When the First Congress responded to these complaints by appending a list of amendments to the end of the Constitution, their handiwork was not immediately or widely regarded as a bill of rights. As Magliocca writes, the first ten amendments simply “did not match the eighteenth-century expectations” of what a bill of rights looked like. Madison himself referred to the proposed additions simply as “the plan of amendments.” According to Magliocca, only Jefferson denominated the first ten amendments as “the bill of rights” at the time, and even then, only in private correspondence.

In Magliocca’s account, the 1940s marked the pivotal moment when Americans elevated the Bill of Rights to its current status as an object of legal, political, and cultural veneration. In 1941, Congress declared the first “Bill of Rights Day,” commemorating the 150th anniversary of ratification. In 1943, the Supreme Court issued its ruling in West Virginia v. Barnette, the Pledge of Allegiance case, and by the late 1940s, the Court routinely referred to the first ten amendments as “the Bill of Rights,” even as the justices continued to debate how to interpret and enforce those amendments.

Franklin Roosevelt was the first president to invoke the Bill of Rights repeatedly in his public speeches. Paradoxically, he celebrated the first ten amendments, which limit government power, in order to justify his unprecedented expansion of the federal government’s role. Roosevelt encouraged Americans worried about the New Deal to read “the Bill of Rights of the Constitution, which I have solemnly sworn to maintain,” and “ask yourself whether you personally have suffered the impairment of a single jot of these great assurances.” With the Bill of Rights in place, in other words, Americans had nothing to fear from expansive economic legislation or new federal agencies.

Although Roosevelt celebrated the Constitution’s limits on government, he also famously argued that modern life required a “Second Bill of Rights”: a set of positive entitlements to economic security and material well-being, including “the right to a useful and remunerative job,” “the right to adequate medical care,” and “the right to a good education.” This bill of rights, of course, never gained the same foothold in American political culture, and it gained no foothold at all in American law. To borrow Justice Jackson’s definition of a bill of rights, the subjects of employment, health care, and education were never “withdrawn … from the vicissitudes of political controversy”; to the contrary, they remain perennially debated and highly dependent on the outcome of elections.

In recent years, perhaps the most prominent critic of the cult of the Bill of Rights was Justice Antonin Scalia, who questioned whether Americans really understood how the Constitution worked to guarantee their liberties. “Most people think it’s the Bill of Rights” that protects their freedom, Scalia said, but “every tinhorn dictator has a Bill of Rights.” (Scalia frequently gave some version of this remark in his public appearances.) What really protects Americans from tyranny, Scalia believed, is the constitutional structure, the way that the Constitution distributes power across the branches and between the states and the federal government. “The Soviet Union had a wonderful Bill of Rights,” Scalia explained, but “it was worthless,” because with power totally centralized in the party, there was no way for the people to enforce their rights.

Magliocca offers a different criticism of Americans’ attachment to the Bill of Rights. If we are going to use that term to refer to the most important parts of our constitutional and legal tradition, Magliocca argues, then we have settled on far too limited a definition. “The Constitution does not state that the first ten amendments are the Bill of Rights,” Magliocca writes, nor, he argues, is there any good reason, historically or legally, to construe the term so narrowly. So yes, let’s celebrate the right to free speech and the protection against unreasonable search and seizure, but why not also celebrate “the abolition of slavery, the Fourteenth Amendment, [and] the Civil Rights Act of 1964”?

While reading Magliocca’s lively and thought-provoking book, I was reminded of something that the constitutional historian Jack Rakove once observed about the difference between the founding generation and our own. It is “curious,” Rakove said, that “in the 1780s Americans expressed confidence in their ability to devise new institutions of government as a supreme act of political wisdom, but today we are unable to imagine how we could ever improve upon what the framers did.” Drafting the Constitution, and its first set of amendments, “required a terrific amount of creative political thinking,” in Rakove’s words. “The framers were rethinking the nature of representative government, they were rethinking the nature of executive power, they were coming up with new rules for judges.” Perhaps we should fetishize the specific products of that creativity a bit less, and instead focus our admiration on the larger lesson that the Founders have to teach: that it is always possible to reimagine what politics and government might be.