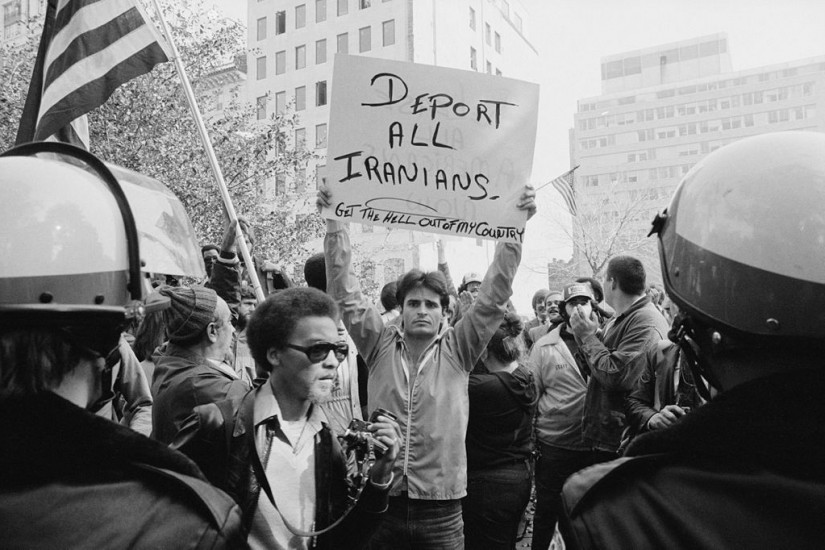 A man holds a sign calling for the deportation of Iranians during an Iran Hostage Crisis student demonstration, Washington, D.C. 1979.
Warren K. Leffler/Library of Congress

Lawyers, organizers, and protesters congregated at international airports around the country, overwhelming airport security with signs that declared, “Immigrants Welcome.” Protesters invoked Ellis Island and the Statue of Liberty as symbols of the country’s promise around migration. A line from “The New Colossus,” Emma Lazarus’s sonnet that is engraved on the Statue of Liberty, was frequently quoted on posters: “Give me your tired, your poor, your huddled masses yearning to breathe free.”

But much of this language—our country’s inclusion narrative—is predicated on myth-making. Indeed, if we look to history, we begin to see Trump’s ban not as an aberration but as a continuation of more than two centuries of restrictive immigration policies and several decades of specifically surveilling Arab, African, and Muslim migration.

In December of 1942, for example, a Detroit resident and Yemen native, Ahmed Hassan, petitioned a court for U.S. citizenship. District Court Judge Arthur J. Tuttle’s decision began by acknowledging Hassan’s “origins” from Yemen and the “Arabian Peninsula.” This fact, he elaborated, was significant to Hassan’s petition because, “Apart from the dark skin of the Arabs, it is well known that they are a part of the Mohammedan world and that a wide gulf separates their culture from that of the predominately Christian peoples of Europe.”

Ultimately Tuttle denied Hassan’s petition on the grounds that, “It cannot be expected that as a class they would readily intermarry with our population and be assimilated into our civilization.” In the concluding paragraphs of the decision, he pointed to a legal precedent for citizenship established in 1790.

In other words, U.S. citizenship for Hassan and others like him was predicated upon proving a proximity to whiteness as it was legally constituted in 1790....

We cannot understand Trump’s Muslim ban without this history. Viewed this way, his is simply the latest in a long line of restrictive immigration policies, policies that are steeped in centuries of racism. It is necessary to be honest about this history to dismantle not just the ban, but a racialized system that allows restrictive immigration to consistently re-emerge at different moments in U.S. history.